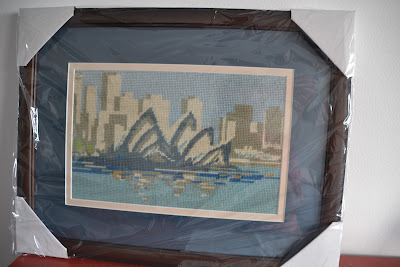 It seemed fitting to be  writing this entry today, even though I'll schedule it for tomorrow to be published.  Today is Remembrance Day, 11/11/11.

I found five tapestries in amongst Mum's stuff which my sister sent down.  These were all done by my Dad who incidentally was in Army Intelligence in WW II, so another remembrance of him.

Dad was in a nursing home for eleven years before his death some thirteen years ago  He had Alzheimers for 12-15 years before going into the nursing home.  That would make the tapestries probably 25-30 years old. 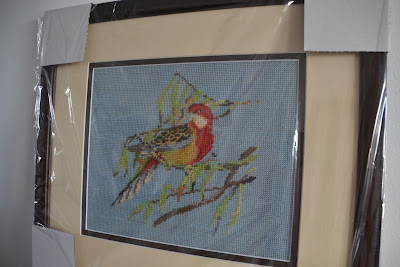 Dad did all the sewing when I was a child.  His mother had been a seamstress and worked many years for the original Children's  Hospital at Camperdown, mending tears in sheets and nurses uniforms and things like that. He learnt to sew.  He used an early knitting machine although I don't remember much of its output.  He made all my clothes, leaving mum to sew on buttons and turn up hems.  She hated even that much sewing.  He even sewed a bit of my wedding dress for me.

He had a standing frame for tapestries and spent evenings doing them.

I have had these two framed as Christmas presents for my brother and sister who know nothing of this blog so I think I'm safe publishing the pictures.  Lynne took me to a place at Penrith where she has had such things and cross stitch framed for years with good results.  They were very helpful there in choosing mounts and frames and Lynne says she has always had good service there.  I'm very happy with the way they have turned out.  Apologies for the quality.  They are wrapped in cellophane which has wrinkled and I am leaving it on as they are a gift.
Posted by Jan at 8:10 am

Hi Jan, what's the name of the framing place in Penrith.Is it the one in High St. I've always used one in St Marys, but it recently shut down. Looks like a lovely job this place has done for you.

Can't find an email address for you on your profile or blog so am answering here. Pro-Frame Design, 116 Batt St Penrith. Off Mulgoa Road. They were very pleasant and helpful when Lynne took me there. did a good job in time quoted. Lynne has tapestries done years go by them and they are in good condition.

They look lovely, Jan. I'm glad you're pleased with the finished result. I hope your sibliings appreciate them.

They're lovely, I didn't have to wait very long at all. I think things which have a special family story attached to them are even more precious.