I've decided that i really am not monogamous in my knitting.  It's been days since  did any work on the Transatlantic shawl although I like it and it's easy.  I answered a comment somewhere lately that I seem to work best where I can swap around with different projects.

Suddenly light dawned.  I needed to start something else.  I've been thinking about doing some of Jussi's baby designs for my friend's baby in Canada.  All made easier by winning an e-copy of Jussi's  Baby Basics book.  Thanks again, Jussi.

I'm going to make the hooded vest which is one of seven designs in the book. (Ravelry link)

I have some yarn for it and should have needles.

I threw out some clothes today.  Yes, threw out.  I've bought several new  tops this year for  summer and decided that I needed to get rid of some old things.  Not getting rid of them because of new ones.  They were old, very old, in some cases and most were no longer suitable even for slumming around at home or doing the housework.  So I summoned up my courage and threw them out, stuffing them down into the rubbish.  They were past using for anything except rags and I already have more than I need of them. 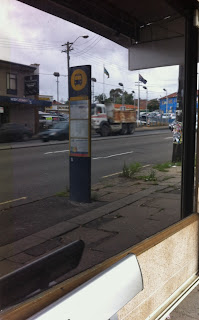 It's been cold here this week and I've had two layers on my top for the last three days.  Back in 1995 and I'm sure of that year, I bought a jumper made from recycled milk bottles.  Not fleece, it looked like a heavy cotton and felt good.

It has been worn and worn and worn.  I even knitted some sample patches of patterns a few years ago and used them as fun elbow patches.  I put it on this morning, it was warm and comforting and comfortable.  Then I caught sight of myself in the mirror and realised it really was no longer wearable.  I had some regrets about pitching this, but it's just as well none of the DILs have seen it recently or they would have been saying something at the very least to me. If not sneaking it from my drawer.

I can't do three posts in a row without a picture so here's a gratuitous picture.  It's the reflection of Parramatta Road in a shop window at the bus stop.  The gloomy day made a perfect reflection.

I would not have known that was a reflection your photography skills are very good.
I hate throwing things out too, but it is for the best. I would wear things I love until they fall apart. Not a good look really.
Oh Jussi's patterns are lovely, and I am sure you will make something gorgeous and maybe then knit a little of your shawl.
Oh we have 20 or 30 older teenagers having a party in the house over the road. They only moved in recently and I can hear them all the way back here in the dining room!! I may not sleep, I hope you do. It is nice to sleep when the weather's cold. It was 27 0r 28 here today: too hot for me.

It's hard to remember that it was cool last week whenI've been so hot and sticky for the past few days (in north-western NSW). Even Sydney is warm and sticky compared to the cold temperatures and unceasing rain of last Wednesday!