my name is Nigella...

... and I'm a domestic goddess!  Probably not, in fact, definitely not, but just sometimes I can pretend.

I had a delivery of my fruit and vegetable box today and it's all unpacked, put away and dealt with.

No pictures, but I've cooked a bunch of rhubarb, paying careful attention this time to avoid the disastrous burn when I turned my head for thirty seconds last time.  It took me days to clean the saucepan of the burnt, crusty mess.  I also have apples to cook because there are more than I'll get round to eating.  I could have put them with the rhubarb, but I like my rhubarb neat, not diluted with another  flavour. 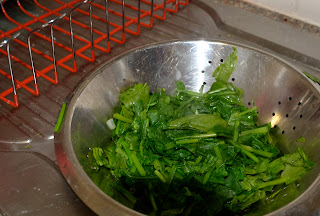 This was a large bunch of English spinach, but I have a lot of green vegetables already and decided to freeze this.  So I chopped and washed the bunch, then blanched it with boiling water and refreshed with cold.  Here it's sitting in a colander in the half sized sink draining, before I package it in sandwich size ziplock bags.  I'd rather eat it fresh, but this will go into something and be fine.  Possibly lasagne, possibly something with eggs, perhaps a frittata.

At least it's not wasted and allowed to wilt. 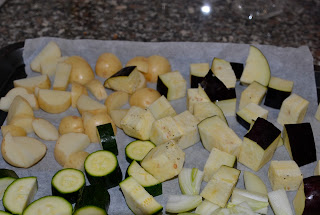 Yesterday  I found a recipe for a vegetable tart.  It had fennel in it baked, along with other vegetables.  While I like fennel, I wasn't going to buy it specifically and the recipe suggested substituting.  So here are the raw ingredients before baking.  Aubergine, onion, small potatoes and zucchini.

I baked them at about 180° C for about 20 minutes.  I need to watch the oven closely as since the fan element was replaced some months  ago, it can be a bit savage. 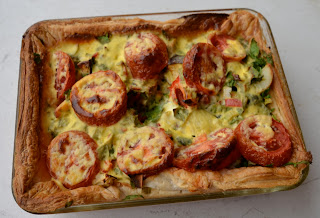 I baked a case from puff pastry, which was pricked very well all over.  It still puffed where it wasn't supposed to.  Filled it up with  the baked vegetables, added shallots, the last of the parsley and some rather ripe Roma tomatoes sliced,  and tipped over the topping.  The recipe said eggs and crème fraiche.  Again, I wasn't going out just for that, so have used a bit of Greek yoghurt.  I have another dish with a similar topping and it always works no matter what the dairy product is.  Bake again till topping is set.  Here's the finished product. 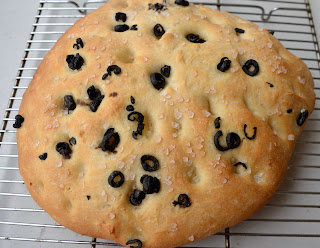 It looks good, it will do three possibly four meals.  I even washed things as I went along, so my bubble of domesticity didn't deflate when I looked at the dishes in the sink.  I realise Nigella probably doesn't have to do her own dishes.  I imagine they are whisked away by some lackey, the minute she puts something down when an episode of her program is being recorded.  I speak too soon, the kitchen floor needs some attention.

In between chopping and peeling and baking and the rest, I made some focaccia.  This has sea salt and sliced olives on it.  I was looking for my rosemary too but must have used it all.  I had some for lunch and when it's fully cooled, I'll cut into pieces and freeze individually.  All ready for lunch.  I even have some smoked salmon in the fridge to go on it.

Spring is well and truly here and summer is on the way, although it's pleasantly cool today.  My fruit delivery had good bananas in it and nectarines, rhubarb, and peaches too as well a s more prosaic fruit.
Posted by Jan at 2:27 pm

Wow! You really are Nigella (well, at least for a couple of hours!!). Is foccacia difficult to make? I love smoked salmon but have never eaten it at home - only when I go out!!

When I win Tattslotto, I will employ a kitchen lackey for you!!
You have been a domestic goddess. The vegetable tart looks delicious and your bread is so artisan-y it could have come from the posh deli on the corner!!
I hate it when I burn a saucepan too. Soaking is the way to go though, not scrubbing!!