I've been enjoying looking around at the blogtoberfest entries.  Not all of them by any means.  I took part in this several times but missed last year and this deliberately.  Last year I was in the throes of selling a house. Sale was scheduled for late in October and this year, well, this year has been a bit of a write-off in many areas.  In one sense I missed the discipline but was sensible enough to realise I could do without the pressure of a daily post.

However, for quite a while, I've been thinking about nablopomo which is running through Blogher.  Many people have mentioned it and some have done the month in a different month.  So I've been over, signed up and made a promise to myself that I will try.  Nothing more than try.  I will try to post each day, but if I don't, I will try to not allow pressure to get to me.  As I use my camera everyday, some will be photo posts.  I may even try to revamp this blog a bit.  I've had the same  layout for years now. 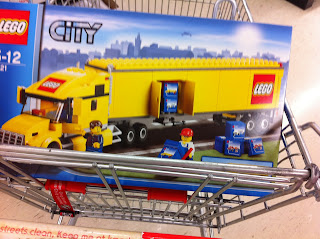 I set out this morning for the mid-week meeting at church.  The bus was very late and when I reached Broadway where I change buses, I still had a wait for the other bus and at least ten minutes in the bus.  It was two minutes before meeting was due to start.

So I went to Kmart to look for presents for grandchildren.  This year I have plenty of ideas for adults and almost nothing for the young ones.  My youngest grandchild is a boy who turned 6 mid-year.  He just loves Lego.  When I saw this, I grabbed it.  There weren't many there and I know that things like this disappear quickly.  Even though he can't read all the instructions well, he's always been able to follow the diagrams.  Just the opposite to me, actually.  This just looked like him.  One down,  more to go.
Posted by Jan at 2:28 pm

My older grandson loves his Lego Duplo. It's interesting - he won't play with conventional building blocks but loves joining all those Duplo pieces together in high constructions which he then tries to drive around on his Duplo cars!

I take it you didn't make the mid-week meeting?

Lego is always a welcome gift and it is good that children can follow the diagrams or the instructions. Good luck with your posting!!!