I've been doing a bit of knitting each day and the transatlantic shawl is progressing.  Slowly.  Better I suppose than regressing. 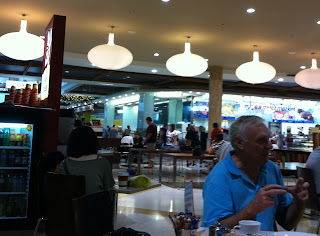 Some photos.  The first is of local shopping centre when I sat  down and ordered a coffee the ceiling lights in section I was in went out.  The stores were all lit and a few downlights hadn't gone out.  I was concerned my coffee might be delayed with power gone, but all was well.

I liked the way these big lights stood out in the semi-gloom.

The man in blue shirt was one of a group of elderly men seated around an enormous square table.  Most had glasses of Turkish coffee  which they sipped slowly.  A couple let strings of amber worry beads feed through their fingers as they listened to the conversation and nodded their head in agreement.  The tables are newish and so are such groups.  Marrickville shops, not the Metro, have many spaces where  such groups gather and pass the time of day, but I haven't seen them here before. 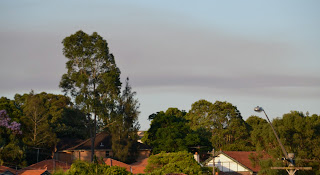 Here's one of the smoke from the big controlled burn by the RFS at West Head the other day.  We did not get much smoke where I was but this was interesting.  It was very windy and I thought that the smoke would be more widely dispersed.  However, here it's in layers and fairly compact.  To my left, further west , there was more a pall of smoke.  All caused I guess by the local geography and its effects on the wind. 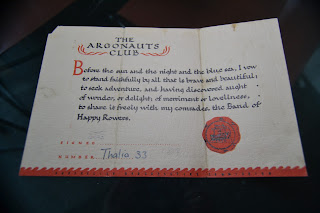 I don't think I've shown this before.  My membership, unsigned I note, in the Argonauts' Club.  I was an avid listener to this and tried to never miss an evening.  I did not even realise that Mum had kept this till I found it a few weeks ago.  DIL bought me a tape of excerpts from the show  some years ago and I enjoyed it.  I imagine my son probably still has means  to play a cassette and I could upload it to computer and make a CD ROM from it.  Humour, stories, serials, songs, and contributions from listeners  who worked their way to gain the Golden Fleece and Bar for sterling service to the club.

And this is really showing my age!  I remember as a young child listening in the mornings to the Kindergarten of the Air with Ida Elizabeth Jenkins and other presenters.  This was the forerunner to Playschool, still the best of such programs in my opinion.
Posted by Jan at 8:56 am

I have to admit that I had never heard of the Argonauts CLub so I did a search. I found this http://www.archivefriends.org.au/index.php/argonauts-registration-form and thought you might be interested!

My parents bought their first TV when I was five but I don't remember that we listened to the radio before that, excpet for news broadcasts.

Oh yes, I listened of Kindergarten of the Air too!! I missed out on the Argonauts, but my mum was an Ovalteeny (sic)!! How lovely to find that it, and I see your name too!! Yes you can do that, transfer cassettes to your computer and then to a CD. We've had a few fires too, I am not looking forward to this Summer.