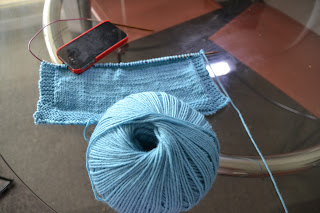 A quick entry today to be  place holder. I started Jussi's vest pattern last night and have done 12 cm.  My fingers started aching then so I stopped for a rest while watching Midsomer Murders.

The colour shown here is Seaspray and the yarn is some of the Rondo I bought a a couple of months ago.  I bought several of the big balls but can't remember at all what I had in mind for them.  This is reasonably accurate, although it's possibly a bit more aqua in colour. It is rolling a bit, hence the phone and ball of yarn holding it down.  I found it pleasant to knit.

And speaking of "aqua," we've had more than enough aqua here for a while.  It's been very cold for November, enough  to have had two lightish but long sleeved layers  on and I was just nicely warm.  It's been wet for days and I seem to have misplaced my good, new umbrella.  I can distinctly remember putting it in the bathroom to dry and now I can't find it at all.  I have another one which I used this morning when I went to get the paper downstairs but it's one of those very small folding umbrellas.  It also has several tiny holes in the fabric, probably from age.  I've had it a long time. 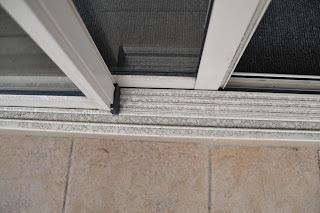 The rain last night was incredible.  It became heavier as the evening went on.  I was speaking to my son on Central Coast a bit before 10:00 pm and he said the wind was bad up there too.  When I went to be an hour later the wind had started here.  The rain was blowing almost three metres across my balcony, under the floor of balcony on floor above me.  It was hitting my lounge room door from top to bottom.  Hundreds of drops all over it.  Picture shows drops making a pattern on bottom of door frame which must have had a lot of dust on it!

In the time I've been here, we've had several very heavy storms but  no water has ever touched the door.  This morning my balcony was sodden.  The large deep saucers under the pot plants were overflowing.  There was water all over the small table and on the top of the air conditioner,  Fortunately it's a sealed  unit and installer said storms were no worry and I could hose it if it was dirty.  I have a couple of canvas folding chairs near the door and they had puddles on the seats.  I stepped out onto balcony with bare feet, to discover the door mat squelched under my feet.  Enough is enough.

There was a bit of blue sky an hour ago, but the cloud now looks as if it's gearing up for a thunderstorm.  They were part of the forecast.
Posted by Jan at 12:12 pm

That is really wild and windy rain. That happens here too, rarely does the rain come into the verandah at the front, but every now and then we have wild weather and it does. The Rondo knitting is looking very nice. I like it.