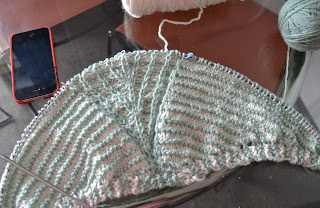 I finally frogged my Catkin shawl.  It was getting to me and I just couldn't see what I was doing that was  wrong.  I had had Stephen West's book of patterns for a while and had almost decided on the Transatlantic Shawl when I saw a couple finished or being knitted.

I pulled the Catkin out and rewound the wool and started. They use similar techniques of slipping a stitch for a couple of rows.  This one however is very easy  to follow.  It is written so that the principles of the pattern are given, rather than actual umbers for each row.  That means it can be as big or as small as wished.  I have a reasonable amount of wool so will try to use it all.  It's written for sport wool but I had nowhere near the amount needed and I did have plenty  of this thinnish Cleckheaton 8 ply.  As I have just been through my stash and found how much wool I really have (eek!), I decided to go with the 8 ply.

Thank you for the good wishes about my son.  He's getting better.  Doctor gave him another  two weeks off work from last Thursday.  The scan confirmed the x-ray, that there was no fracture to the skull.  However, I stopped for a coffee last Sunday as I was very early for church.  Man at next table to me had a skateboard and I was horrified when he picked it up and I saw just what was underneath.  It's been so  long since my sons had boards I had forgotten just what they were like underneath.  I felt sick as I visualised the axle assembly being wielded on head and am very thankful he's alive.

I've mentioned before that I bought a DSLR a few months ago.  A friend gave me the standard lens used on such cameras as he had two.  I've been enjoying it and use it almost every day.  I've been posting on Project 365 and have now managed  to post for over half a year.  However, the lack of much of a zoom was frustrating me.  I did some research and asked advice and looked on the net.  Then I went down to Digital  Camera  warehouse at Canterbury near me.  They are also in Melbourne and Brisbane.  They also sell on the net and have a comprehensive web site.  Canterbury has good prices and great, helpful staff who don't laugh at a novice's questions.  Friend did not come with me so I was out on my own to make a decision.  He's  a photographer from long back and has a range of equipment. 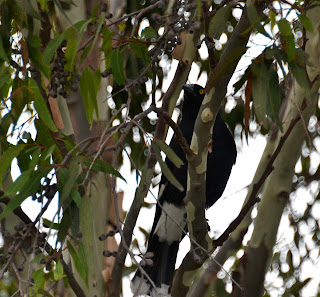 I bought a big zoom lens 18-270 mm, and have had a good time experimenting.  I was on roof this morning trying to take a photo of Bunnings clocktower down the road from me in the old Peek Freans factory.  The other day the wind blew branches as a frame around the clock, but it was not co-operating this time.  I moved the camera slightly and saw I was being watched attentively by a currawong.  It opened its mouth and sang to me.  I was immediately taken back as I am every time I hear that sound to Pearl Beach on the central coast.  Early in the morning, sunrise, currawongs, shiny light and the soft sound of the water on the sand.  It has always had a calming effect on me and today was no different.  I know currawongs kill and eat small birds, but their song brings serenity to me with its memories.
Posted by Jan at 3:01 pm

They do have a beautiful song, don't they?

I was in the Big Box Craft and Homeware Store today - some sock yarn left but boring colours. I didn't buy any - I have two archive boxes of it already!

I am very glad you son will be OK. I don't understand why people want to hurt others.
Your shawl is looking lovely, the patterns are clever and unusual.
Great zooming, I can really see the bird so clearly. I hear galahs and kookaburras when I walk.