Busy, busy, but who isn't at this time of the year?

I've actually not much more to do, just need a few groceries etc.  Our family do was last Sunday, hastily re-arranged to my son's place instead of the beach.  It actually didn't rain but was fairly gloomy all day.  Much better to be under shelter than to need to move in a hurry.   It was a pleasant day and we all enjoyed ourselves.  All the children played cricket with Master Six's set.  Not a present but he was thrilled to have what seemed like a whole team to play with him. 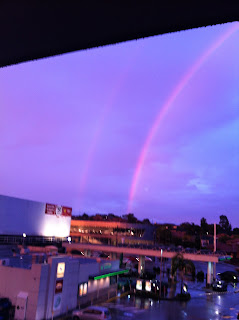 On Monday late afternoon, early evening really, we had a cracker of a thunderstorm here.  Very heavy storm with lots of lightning and big claps of thunder rolled in from western Sydney.  DIL who's an SES volunteer in her area was called out to a number of distress calls.

After it had gone, there was almost sunshine.  I looked out to see a very peculiar, very pink light all around.  Then I saw a rainbow going into the sky with an almost vertical arch.  There was no corresponding right hand to the arch, just the ascent.  I knew I would not have time to set up big Nikon, so grabbed my phone and hoped for the best.  As I took this first picture I realised there was a double bow to the rainbow.

I have seen a few photos of this but have never seen a double arch in all my life.  This photo has been downsized a bit, although you can enlarge it by clicking.  However, I haven't retouched it in any way at all.  That really was what the light was like.  Very eerie.

I'm glad to be home.  Have spent two days at son's place minding grandchildren.  I must be getting old, but I was very glad to return to my quiet tidy place last night.  Miss Seven screams.  And screams then some more as if she was being murdered.  Admittedly, her brother hit her with a plastic baseball bat, but she'd already chased him for some minutes wielding the bat herself.  Unfortunately she seems think screaming is a good response to  anything at the moment.

They have a newish puppy who didn't know me.  He barked and barked whenever he came near me.  Hearing aids amplified his barks far  too much.  It was good to be home.

I finished my pink sock several days ago and have started the next one. Fortunately I haven't done  much on it as It was moved in the bag I took to son's place and I must  have pulled out a needle.  I think I'll rip it back and just start over, it' only a few rows lost.
Posted by Jan at 9:51 am

DD and the Grandsons are here - there's never a dull moment with a nearly-two-year old who is trying his boundaries: right now its by pulling on the cord to the plugged-in-but-not-switched-on iron which he has been told many times not to touch!