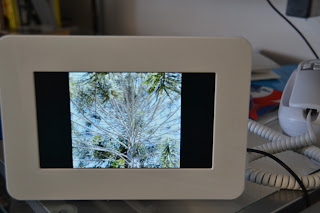 To me Christmas seems a long time ago.  In one sense it was, as the family Christmas was on 19/12, a week before.  I had little that needed to be done before the official day.  This weeks seems to have been in slow motion and I have had to constantly stop to work out just which day it is.  Summer holidays.  Festival of Sydney through January.

Even Christmas to the rest of the family seems to have been calmer as one DIL put it.

I made a very definite decision to have Christmas Day to myself.  I enjoyed it.  I went to church in the morning where we sang lots of carols and had a light morning tea afterward.  Many were away with their families so there were few children out.  As we greeted each other, I had my hand kissed!  Let me say it's been a very long time since that last happened.

I returned home and had a lovely meal of prawns and a couple of pleasant salads.  I spoke to all the rest of the family and wished them a happy Christmas and spent an afternoon reading etc.  I totally enjoyed it.

Boxing Day was lovely.  My friend picked me up about 10:30 and we went to Blaxland in the lower Blue Mountains to friends of his.  Well his friends originally, but I've now known them for some time and been away with them.  The four of us were teachers although only one is still teaching.  They have a very pleasant house  on five acres.  70's style but very comfortable and done up to suit them.  The husband now works translating and writing and his wife is a school librarian.

We sat outside seeing if we could name the birds as they flew past.  Leftovers from Christmas was our lunch and we sat and talked, listened to music, told jokes, used Facetime to speak to their daughter in London.  The afternoon went on and eventually there was another simple meal.  It was a lovely day catching up with them and my friend walked me to my door at just before midnight.  It had been a very satisfying day.

Son and DIL with whom I lived gave me a Samsung digital photoframe.  I've heard such things can be frustrating to set up.  I opened it yesterday and put it together.  Drat!  It would not run from USB cord and computer.  It wanted an update of firmware or drivers.  The link gave only something for Win XP.  It's been some years since I used Windows and I don't care if I never have anything to do with it again. There is a program to simulate windows on an Apple, but I didn't want to go that way, I love my Mac.  I hunted and searched  on forums to find updates for a Mac.  Nothing.  So today I bought a big USB memory stick and transferred some photos to it as a trial.  After a bit of fiddling and pulling out plugs and replugging others, the thing works.  Now I can load up the  stick with more photos.

It's far from quiet here.  There are often lots of ibis and gulls who feed from the rubbish bins.  Lately  the cockatoos have decided this is their territory, although they don't have same eating habits.  About twenty of them have been flying around screeching for the last half hour.  The other birds have left and the cockies will leave a few cockatoos on watch, obviously where the phrase originally come from.  A few sweeps over the place for the next few days will guarantee no ibis etc for the next ten days or so.
Posted by Jan at 8:30 pm

Sounds like you've had an ideal Christmas from 19th onwards! I'm glad you were able to get your digital photo frame working. We gave one to DD and SIL as an engagement present but I've never seen it in action!

Happy New Year Lynne. It sounds like you had a lovely xmas. Sometimes I think the digital contraptions make me feel old as I can never work all of them out, so I just leave it to my son to work out. Once he shows me I seem to remember it and it is much easier then. We dont hear many birds in our new house, just lots of frogs making bonk bonk noises all night!

Yes, the birds in the bush here are very vocal at the moment too, must be the season. So glad you had a lovely Christmas Day, I am always loved singing carols at Mass. You are clever, and very determined, to get the photo frame to work, well done!!