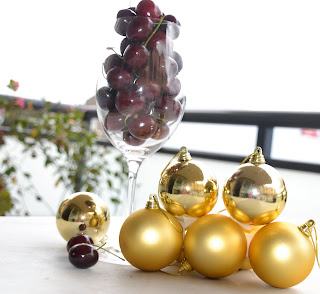 Cherries are on of my favourite fruits.  Unfortunately the season is just so short that they are gone while I'm still getting used to them being available.  I like the variety shown here, Ron's Seedlings, big, fat, juicy and flavourful.  Unfortunately their season is even shorter than the general cherry season.  This year's summer is weird weather.  I took these photos in early afternoon and some look as if it was dusk with very dark clouds.  As always, you can see more detail by clicking to enlarge.  Last night was chilly and I pulled a light cover over the bedclothes.

We are having our family get together on Sunday and it was to have been at Pearl Beach.  However the forecast is for about 21° C and rain from late morning.  We have changed venue to son's place for lunch.  He's about ten minutes away.  If it fines up, there may be a trip to the beach later.  We thought about temperature, then clouds and rain and considered a cold breeze off the water so changed.

I'll be glad when this is over.  We all have a good time, but it's been hard to organise this year with date changes, people changes, food preferences and so on.  we started the organising in what should have been plenty of time, not this year.

I was out late last night minding grandchildren while son and DIL went to SES dinner.  She has belonged for over five years now and has most of the qualifications  for many types of emergency work as well as  floods, fires etc.  It was a strange coincidence but my silent number landline was rung early in the morning.  Charities are allowed to ring private numbers.  It was fundraising for SES.  I said DIL belonged and my support was minding grandchildren when she was called out, sometimes for a week or more in floods up the coast or fires in Victoria and other places.  She couldn't do the SES work without my contribution so I consider it as valid as financial aid.

Miss Seven whose thundery face appears a couple of posts below, has finally decided reading is fun.  She read me quite a long book last night.  I asked her if she'd read it before.  No.  She did a creditable job in working out new words and read along without a finger under the line or the lips moving as she said the words to herself, so a vast improvement.

I did some sock knitting while I was there, but jabbed myself in the finger with the point of a sharp Harmony dpns. It's OK today but a bit tender.
Posted by Jan at 2:21 pm

Gotta watch those needles - the nickel plated ones are even worse!

Hope Sunday works out for you - we also have the family get-together at Picton at my brother-in-law's house. I have to make cheesecake and DD has to make rice salad.

I agree you make a fine contribution to the SES!

I'm sewing and I have a hole in my finger from pushing the needle. But those pointy socks needles are just as bad. We have delicious local cherries and I especially love the really dark, almost black ones. I am pleased reading has been deemed a happy experience!!