I am not at all experienced with night photography, I think this is the second time I've tried some.  However, last night I stayed up to see if I could get anything at all from the eclipse of the moon.  Clicking on the photo will give a bigger picture set into  a darker area which makes it easier to see.

It was a bit amazing that any moonlight could be seen at all with the cloud cover we have had lately.  The first picture was taken a bit after  11:30 pm from my balcony.  I don't have a proper tripod and I think that would have improved the shots  as it's hard to hold the camera for time required.  There was a lot of ambient light around from street lights from the highway, McDs, service station etc.  There was a fair number of clouds which gave their own problems with the light.

The succeeding photos are about five minutes apart and the eclipse is nowhere near finished.  However, the cloud cover was beginning to drift over the moon and I was getting cold on the balcony, so I gave in and went to bed.

I've made mayonnaise before and while it's fiddly, the taste is superb.  Today I added garlic to the mix and turned it into aioli.  Very nice it is too.  Just as well it's fiddly to make.  I could eat a lot of it but  make it only a couple of times each summer.  If I buy mayo, I buy the Thomy egg type.  A jar lasts quite a long time, but this is much nicer than even the dearer supermarket brands. 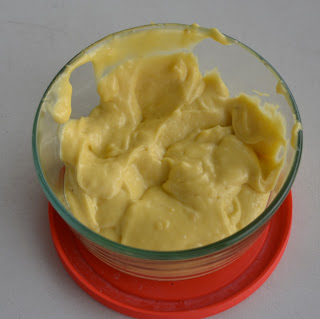 Put everything EXCEPT the oil into a container, deeper rather than flatter makes it easier to mix.  Mix with hand mixer or whisk etc thoroughly till very well blended.

Very gradually, no more than a teaspoonful at a time to begin with, add the oil.  Beat very well till blended.  If you put too much in, especially at the beginning, it won't emulsify but will sit separate as a layer to the other ingredients.  Keep doing this till oil is all added and well blended and mixture has thickened.

I had some rye mountain bread.  I used two pieces of this each spread with aioli.  A slice of ham and some salad stuff.  Roll up each bit and enjoy.  Finished off with some cherries in the sun.

Just in time too.  Sun has now gone, it's too dark to read without a light and the rain is pouring again. There's thunder around too.

I'm actually knitting a sock.  A  sock!  Will take photos tomorrow or when light is better.  Apart from  a couple of pairs of baby socks, I haven't done a sock for a long time.  Just plain sock.  round and round, no real effort or thought going into it.  I'm well down the leg on the first sock now.

I didn't even know there was amn eclipse last night but Older Grandson was just as impressed with the moon rising as he was with our Christmas lights and the cars driving past!!

This morning I had a load on the line and another load in the machine when I happened to glance out the front window (westward)because I thought I heard thunder. Talk about black! We waited to see if it would blow over or rain but about half an hour later we started getting the big, heavy drops. We raced out and brought in the washing and threw it in the dryer as the sun came back out! That only lasted ten minutes - we had a torrential downpour soon after and have had a third thunderstorm this afternoon. There is nowhere for the water to go in the sodden (clay) ground so we have a pond in the front yard where there is usually only a dry (man-made) creek bed!

Oh they are fabulous hotspots. It was cloudy here, and raining hard so no chance of seeing it. I am hoping for good weather for the Transit of Venus next year. I like to make dressing ands mayo too. It is so much nicer than the bought ones, I like Thomy too, but I must remember to add some ordinary oil. I think all olive oil is a bit too tangy for me. Yum, aioli!!
I think a plain sock is very restful and pleasant!! Too hot here to knit again.

I missed the eclispe,I got myself too upset about stuff that shouldnt matter,never mind,I gotr to see your pics,,a Sock,I love knitting socks,very addictive@ I think I must have at least 20 years supply of sock yarn..