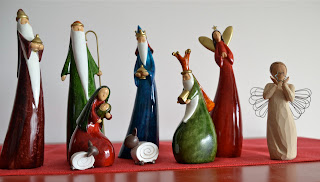 My calendar popped up the reminder that it's been four years since I walked out and left my husband.  He had actually told me some time before that he considered himself no longer married to me as "I wasn't the person he was supposed to have married." Much twisted thinking went into that.  Eventually, that and abuse and infidelities got just  too much for me to cope with and I left.

Right on Christmas, it was hard  to cope with everything,  and I spent a lot of time knitting and trying to get myself back together.  I knitted fourteen (I think) pairs of socks in the souther Summer of Socks challenge in the weeks leading up to leaving.  Very soothing, no brain knitting.

I spent the next year settling down and started seeing a lawyer after that.  He was very good but took some months off to deal with a major tragedy in his family.  Things were finalised last year and my house was sold, although the settlement did not come through till February this year.  I bought this place and have now been here eight months. Now I live by myself for the first time in my life and have had to make a lot of adjustments.  I'm trying to be always tidy and to put things back immediately I have finished with them.  I know that's easy for some, but I'm not that sort.  However, if I make the mess, who else is there except me to clean it.  Put my keys in the same spot and don't go outside without keys and phone.  Eat properly at the right time.  All things which are just plain sensible and good for my health, safety and mental well being.

So what does  the nativity scene have to do with all this and the anniversary?  My husband did not approve of such things, he seemed to think they were superstitious or something like that, so I never had one.  He had a violent temper and I wasn't going to risk anything by provoking him.  I bought this last year but this is the first time I've put it up in my own little place.  It's missing some of the more traditional characters that some sets have, but I like it and the curves and colours.

The little angel on the right obviously is not part of the set.  She was perhaps the last thing my mum bought for me and on the box she had written, "For your Christmases to come."  Mum was amazing with presents.  She loved giving things away and spent a lot of time searching for exactly what she wanted.  Right up to the day she died just before her 90th birthday she could tell you all the birthdays in that particular month and what she had bought.  This was not only for immediate family but grandchildren and great grandchildren, a large circle of friends and all their children and great grandchildren whom she treated as if they were her own family.  This little angel is handmade.

After the Christmas when she gave me this, she had a fall and a stroke along with a couple of other nasty illnesses.  Much to her disgust, she entered a nursing home as she needed care we could not give.  She needs two people to support her standing as otherwise she crumpled to the floor.  Six months later, she had a major stroke and never regained consciousness, and died some eighteen hours later.

So lots of thoughts have been running through my mind these last few days.
Posted by Jan at 8:00 am

It is a very unusual but charming nativity set. I love your story about the angel and I would have it on display just for the sweet memories.

And I can't believe it's been four years - that means I've been following your blog even longer than that!

I think that is the loveliest nativity set I have ever seen. All the more special because it is a symbol of the strength you have shown over the past four years in particular.

I hope your angel keeps you company for many more Christmasses to come.

You should be so, so proud of yourself for getting through all that and coming out stronger and still standing.
What a beautiful nativity set.:)

I love your Nativity and the special story about the angel. It's been a difficult few years and you must be enjoying stretching your wings and exploring lots of new things. You always sound happy now in your posts, and that is a good sign. I am with you on the 'tidy' thing. If I don't put the keys in the door and the phone in my bag I just can't find them, and the dogs' collars?? That can cause havoc when it's time for a walk!!

I hope the future brings you wondrous things!And I love your Nativity Scene,Im going to Church on Christmas Morn,no DH wont like it but Im going anyway!