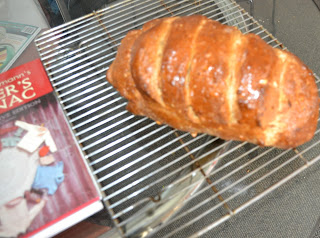 I haven't made bread for some weeks now.  I don't eat a lot of it and just didn't get around to getting any. I was  given a loaf of a good brand as part  compensation for a mix up in my fruit order and I bought a loaf from a bread shop.  The good loaf was OK and the other wasn't, but I think I'm spoilt by eating homemade bread usually.

This is mostly multigrain flour with the amount made up with some strong bread flour.  I added a handful or so of pepitas and it tastes very good. I had milk which needed using so that's the liquid instead of water. I glazed the top of the loaf with the last egg I had and this has given the golden shine to the bread.

While shopping yesterday I bought a container of what is really a beetroot pesto.  Beetroot, cashew nuts and parmesan cheese.  I had two medium thick slices of this bread, spread with the beetroot pesto.  Along with some fruit, this made a pleasant lunch.

Yes, that's Elizabeth Zimmermann's Knitter's Almanac you can see.  It's the hardcover anniversary edition which has more in it than the smaller paperback edition which I also have.  I bought this copy last Christmas, I think.  Each time I read her work, I find more in it, or I see more clearly what she is describing.

I was wondering what to take to the family lunch at the weekend.  There'll be lots of BBQ things and I wanted to avoid anything with gluten in it.

I found this recipe for beef wrapped in prosciutto in an email from the Butcherman from whom I occasionally get meat ordered.  I used his business when I had the canteen.  The meat is around the same price as supermarket for ordinary cuts of meat, but it's much better butchered and packed.  Fancy cuts and restaurant style cuts are dear, but meat's dear anywhere these days.  Have you seen the price on cutlets?  Not on my shopping list anymore, I'm afraid.

I couldn't find a beef fillet near the size suggested so bought two.  I'll have to be careful not to overcook them.  I'll do them tomorrow and take it up as  a cold meat. 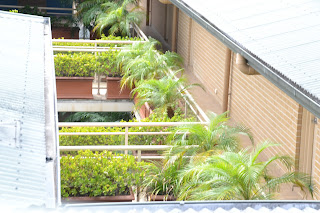 After I'd bought the beef, I found a largish pork fillet.  I think I would have preferred that but the other was bought.  The pork was cheaper too.

I've been fiddling with my camera and trying different things.  This is just a normal photo and settings but it's taken from the roof garden here.  You can see how there is a garden courtyard on each floor.  The roof garden is really five floors up. What you can see is the fourth floor or level 3 counting the ground floor by itself.  I'm on level 2 (third level) and my front door would be in the very right hand bottom corner below this level.

There's a bit more cover on my level as the walkways across from one side to the other are covered.
Posted by Jan at 4:02 pm

Oh that recipe sounds fabulous. Meat is expensive and the frenched lamb chops ( chops on sticks we call them at out house) are almost $50 per kilo here. I have some fresh beetroot I am going to bake next time I turn the oven on. Yum!!

The last time I looked at the price of cutlets they were horrific! Needless to say, we haven't eaten them in a long time. It's funny that when we were children lamb was common and inexpensive and chicken was rare. Now we eat chicken every other day and lamb rarely - it's now priced way out of the market! I considered pork for Christmas but there are only four adults and one almost-two-year old to feed so I went with a smallish turkey breast and a very small ham (on the bone). Even then, the two of them made 20% of my grocery bill!