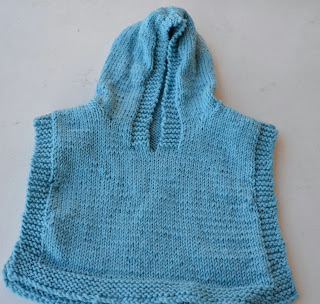 The hooded vest from Jussi is finished.  Ta da!  Well, I still need to find some buttons for each side from my stash, and it very definitely needs a washing and blocking, but I have woven in the ends.

I'm not going out again today and it won't be dry, but I'll send this on its way to a long awaited and joyfully received little boy in England on Monday.  After many miscarriages and other unpleasant things, little Richard Charles stayed full term and is now five days old.

I have bought Jackie French's book, Diary of a Wombat, to accompany the little vest.  Something from downunder.

I chose a good day to go shopping  today.  As I said, I have been replacing well worn and fairly worn out items of clothing.  I went into Target today and they had 20% off tops and underwear.  I found a good everyday top on special and then less 20% so put that in my trolley.  Thought of Cindy as it's a pleasant green.  Walked around a bit further and five bras in pretty colours, my size and preferred style, fell into the trolley too.  Much needed and I'll happily throw out most of what's in the drawer with worn out elastic and droopy straps.  That caps off a good week.  I was in Woolworths at the beginning of the week and they had Bonds branded underwear, two to a pack, reduced to $4.40 a pack.  I bought several packs.  Reduced from $14 and all I could see was that the packs were a bit dusty.  Woman at checkout said she'd found them too and bought several packs.  All sizes just thrown into a trolley near Christmas things.

Now to wash and block the vest.

Sounds like you've had a good retail week! I went to Millers in Moree and bought a skirt, one pair of capri pants, three tee-shirts and a swimming costume. Obviously they have a lot of bigger women in Moree because there was far more avaiable in my size there than there ever is in the local three stores!

The hooded vest is just lovely, it has such an interesting construction. I am very glad that Richard has safely arrived. Oh, green top, how lovely!! It is nice when you can find the things you need. I make an effort to throw out the old things too!!