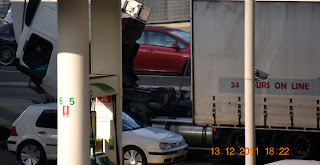 I have been knitting on the pink sock and am almost down to the toe but this is a more interesting photo. Clicking will enlarge it.

This truck has been broken down in the truck lane of the service station outside for over six hours now.  I've glanced out many times to see a couple of men disappearing into its innards, but the truck still cannot move.  A large tow truck was brought in, but not large enough. the small white car belongs to a mechanic called in to  help.

I'll be watching with interest later on.  This service station sells lots of fuel and has at least one delivery everyday.  The problem is that the truck is parked over the covers to the underground tanks.

My son who was bashed and mugged on October 19 has been back at work for two weeks now but on reduced hours.  He's been working twenty hours a week and this week that was to increase to twenty seven.  He was planning two long days and three shorter.

However, he was barely at work yesterday when the police rang and asked him to come in to see if he could identify the mugger from a line up. It seems that while the police had not heard of the mugger with a skateboard when son was mugged, the fellow has been emboldened and done several more.  He was finally shown on a surveillance camera.

Son went into the city feeling so churned up he could not eat even an apple for his lunch.  He's fairly sure he could tell the right guy, although two were very similar.  I can understand the churning stomach - mine still turns over when I see a skateboard.  He was very upset and sounded dreadful when I spoke  to him.  The doctor gave him a certificate for two days off.  He said it all came rushing back.

There's been no rain today and the next two days should be fine.  However the rain is forecast to return on Sunday.  It would.  Lunchtime is family get together at the beach.
Posted by Jan at 7:57 pm

It;s raining here even as I read this!

I'm sorry to hear that your son has been upset again by this episode; hopefully justice will follow although that can't change what has happened to him and his family, and the other people that were mugged by this fellow!

Oh that's an awfully long time for the truck to be broken down. I hope it is gone now??
I would think anyone would be upset after reliving an attack. It is an awful thing to happen to anyone.
Hope the rain stays away on Sunday!!