a page from grandma's brag book 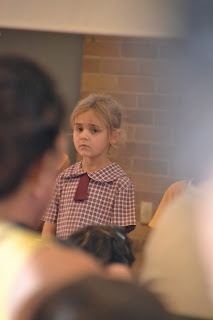 Well yes, definitely a page  from  grandma's brag book  today, but why have a book and not brag?  LOL

Youngest granddaughter who is Year 1 won an award  for the number of awards she's won through the year!  I hope this is  an encouragement to her.  As the youngest in the family, she coasts a bit, knowing that her elder sister may well pick up the slack for her.  She's not inclined to exert herself either for much the same reason.  However her teacher seems to manage her quite well. 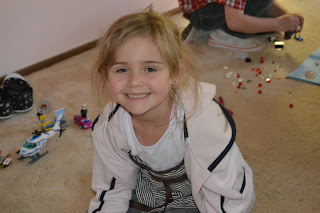 Here she is on Grandparents' Day at her school.  Miss Seven has a temper and has been known to throw the occasional tantrum.  This is in her class presentation an hour after her father took her iPod Shuffle from the collection of treasures she had put on display in the classroom.  Pupils had to bring things from home in a small container which showed something of themselves to others.  Well the iPod Shuffle definitely does that, but taking it to school without permission was not a wise thing to do.  It would have been stolen as all the displays were easily accessible to anybody in the room.  School, BTW, does not allow such things to be brought.

So I hope the award gives her an incentive for next year's schoolwork.  She's quite bright and well capable of excelling at whatever she has to do, not just the things she wants to do.  The happier photo was taken at my birthday party in August. 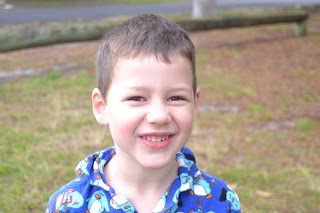 This is Master Six screwing up his nose at the camera.  He's a funny little boy with his father's quirky sense of humour.  Loves the Goons, Dr Who and similar.  This was taken in August, also at my party, but somewhat earlier in the morning.  He's the one who believes large spiders have nine legs as I detailed a few posts ago.  The ninth is to support their head.

School has been good to him and he's at the end of the Kindergarten year.  This time last year he was determined he wasn't ever going to school as his sister, five years older, had told him that "they" would give him homework and he'd be in big trouble if he didn't do it.  He used to be easily annoyed and was frustrated.  I think much of this stemmed from his then poor speech.  Family could usually get what he was saying but not always and frustration at not being understood would cause major behavioural problems.

A year of speech therapy before school helped enormously.  He settled in to school quickly and his last report was very good.  He's reading well and improving every week and his maths skills are good.  Even better, his report said he was the most popular person in class as he was kind and helpful to his classmates, a far cry from earlier times when other young ones could not understand him and shunned him.  There is a big certificate on the fridge at his place for  having 35 "excellents" in a row and a certificate for participation in the Premier's reading scheme.

His dad, my son, rang yesterday.  Finn had an Awards Day yesterday and received the prize  for Citizenship in the whole of the Infants School.  This carried a book voucher from Dymocks books and a voucher for KFC.  So they celebrated last night at KFC.  Son, a very god cook,  grudgingly admitted it was edible.  They hardly ever eat at places  like that so it was a real celebration for young Finn who will happily boast today at school, I imagine.  Good to be part of the gang, I suppose.

So grandma's brag book is filling up. 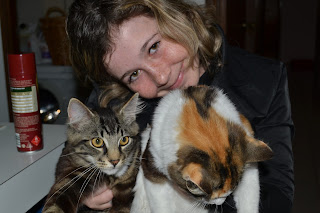 I've just had an SMS from my son to say that Finn's big sister, finishing 5th class has also won the Citizenship Award.  Primary School Awards day is today so parents have had to backup school attendance.  I wonder if son can back up for KFC again tonight?

Here she is with the two kittens, Monty on the left and Python on the right.  She has a good command of language and is quite bright all round.  However, right at the moment it is not cool to show intelligence.  I hope she gets over that!

This is the girl who jumped on my neck when I was minding her  before she was three. At the time,  I had a headache from, stiff shoulder and neck muscles and was not very happy when she took a leap from teh stairs behind the lounge onto my shoulders.  Her comment, and remember she wasn't three at the time, "You not a happy chappy today, Grandma!"

I'm so glad that Finn was able to get the help he needed and overcome his frustrations.

I hope Youngest Grand-daughter's award helps her to "lift her game" next year.

You have every reason to brag! Please do it more often!!

Well, lots to celebrate there!! I love that expression on MIss 7's face, I remember it well. I think most schools say expensive technology should stay at home!! She's done so well, and Master 6 has come so far in the year!! I agree with him on the spiders too.