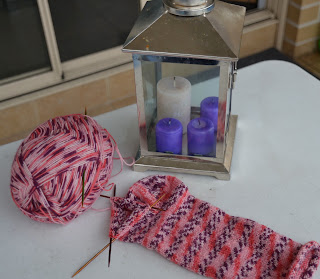 Rain, rain and more rain.  Throw in a few thunderstorms, one at 4:00 am this morning and there's the weather for today.  Thunder is still rattling around.  My brother's suburb had 72 mm of rain in a few hours last night and I think we would be following that closely.

I was planning on going out to local shops but don't really need to, so why bother?  The stick blender I used for yesterday's aioli is on the way out, quite rapidly I think, and I'll get a new one.  Just not today.  The mixer is third hand so I think it's probably done its dash.

The yarn is the Moda Noir from the big place no one likes much.  I bought it when I was out at Penrith with Lynne to get tapestries framed.  It was reduced to $2 a 100 gm ball.  Who could argue with that?  It's OK to knit with and will do for everyday socks.  I used some of this same yarn in a small shawl last year sometime.  I wasn't happy with it then as there were many spots in the black and grey mix which had no dye on them at all.  This ball hasn't suffered the same way, thank goodness.  As you can see, I'm well down the foot now.

I was watching the men's hockey championship from Auckland yesterday on channel 2  before dinner and got quite a lot done on the sock.  I've been watching the matches all week and have seen four or five.  I enjoy hockey and used to go with DIL when she played goalie in top Sydney grade matches.  Men's hockey is much faster and more cut throat. although I could name some teams from the Sydney competition for whom winning was everything, regardless of how it was achieved.

Wow!  It's stopped raining.  That doesn't mean much, there could be another cloudburst by the time I  reached the bus stop two minutes away.  Think I'll wrap presents.  The family get together is next weekend at Pearl Beach.  Weather was supposed to be fine but week's forecast has rain now.  #3 son and family live a few minutes away from the beach, so we have a backup plan.
Posted by Jan at 10:24 am

The yarn is much softer if it's washed in conditioner too!

WM's family get togehter is this coming Sunday at his brother's house; luckily it's fairly big because there will be quite a crowd of us - WM is the eldest of six and five of those are grandparents!

We had some rain but now it has stopped. That is very pretty sock wool and I am glad the dyeing is correct. At $2 a ball it is a steal!! I saw we won the Hockey and I think one of ours cored the only goal!! We have a friends' get together this weekend on Saturday. It must be the pre Christmas weekend for meting up.

Im on my 4th Moda Vera sock colour way and really only enjoyed knitting one,the Laguna colour though Id love to get some of that pink,everyday socksfor sure,I have oodles of luxury sock yarn,these however are great for portable knitting!
PS I thought the Laguna colour felt softer,Ive knitted a pair for an Aunty for Chrissy, and end up buying another ball $5 in Perth last week just to have the colour for me!