At afternoon tea time, I have been making myself something to drink and taking it and my new crochet book and yarn outside to the balcony where I sit and sip and practise some more.  All very genteel.  The balcony is shaded by then although it doesn't get a great deal of sun through the day and there's usually a breeze.  Just as well, I'm still adjusting to heat after the cold wet start to summer.

All these need blocking.  This is called a picot leaf.  Not quite right at one end where the picot should form the point at end of leaf.

This next is called a small picot flower which was quite easy.  It was shown as a slight spiral in the book.  It's curling a bit here much like a stocking stitch scarf. 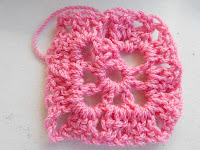 I decided I'd not rip them back but keep them as a memento of learning new stitches and patterns.  That probably means I should darn in the ends.  I doubt that will get done.

The last is a small spoked flower.  I see I've made a mistake in the set up foundation row.  I'll probably try this one again.  With a bit of blocking it would indeed be a square.  I did crochet a  yellow and white pram cover when I was pregnant with first child.  Lots of squares joined together with smaller circles.  I also made an enormous 8 ply granny square lap rug.  Just the one square increasing on each round.  By the time I finished it, each round of colour took over one ball of yarn.  It was colourful and warm in a holiday house we built in the bush where winters were cold. 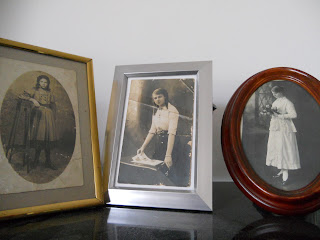 Here are three pictures of my grandmother who did such beautiful crochet.  Unfortunately the glass is broken on one and the photo itself needs restoring as there has been a fold across it.  She was born in 1897 and died in 1975.  The first picture shows here at about ten.  There's no date on the back.  A bit stiff and formal.  It's a pity the second one is hard to see.  She's sixteen and has a beautiful blouse with lots of fine tucks on it.  I can see where my curls come from.  She's wearing a lovely silver bracelet I now have.  It's hinged and has a safety chain.  The top half has  a garland of raised flowers and leaves dancing across it.

You can see them a bit larger by clicking but the details are still not really clear.

Oh how lovely to have those photos and to also be able to wear the bracelet. I have my grandmother's engagement ring which I can't wear because my medication makes my joints swell. I think it all sounds very genteel, there on the balcony, crocheting with tea. The flowers look so pretty and I do agree that blocking helps a lot.

Yes, crochet is much faster than knitting but uses up about 1/3 as much yarn again for the same sized article!

Like you, my crochet is rusty but i am now tempted to have a bit of a go.
I'm such a butterfly though and must finish the hat I'm knitting first, before the winter disappears.
Love your photos too.
Cheers Gillian

Love this post - I'm imagining you enjoying your crochet and tea on the balcony!

How precious to have those original photographs. I love family history - such interesting connections between past and present.

Thanks for your comment on my blog and offer to meet up sometime. I'd love to take you up on it at some time in the future.