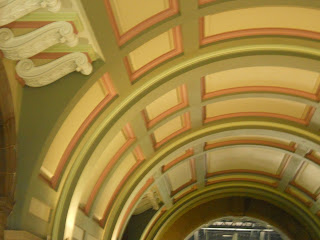 This post is as much as test as anything.  I had major problems getting BLOGGER to let me do anything with photos yesterday.  It certainly wouldn't let me put any up.

After I arrived at Central on Monday, I took a few photos of some of the renovated parts of the old station.  This is one of the side entrances to the main area.  It's very attractive in real life.  The pink on the outside of the squares is more of a dusky pink than shows here and less of pink primer paint.  The ceiling is quite high, possibly 25'.  (I'm old fashioned about ceiling measurements and can visualise how  high that would be.  Can handle metric in most other areas.  LOL.) 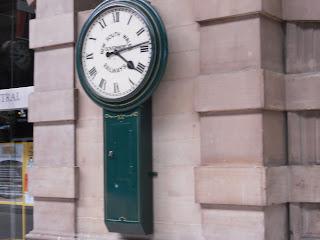 This clock is on the wall just outside the entrance to the area shown above.

The writing in the centre of the clock face says New South Wales Government Railways.  Unlike many of the historic clocks around Sydney, this one was working and said the correct time.

Government Railways have been through a few incarnations since that clock was first put up.  I wonder if much has changed in that time.  Even I can remember going to the city from Burwood when I was young with my grandmother on a fast train which stopped Redfern, Central and then the city stops.  That trip was fourteen minutes.  It usually takes longer than that now for the same trip. 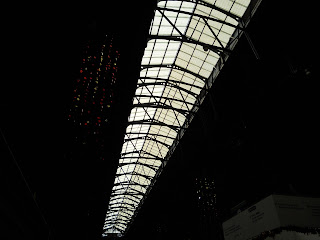 This is in the main area of the station looking up to the very high roof area.  As it was lateish afternoon, there was no sun shining through the glass area, so the contrast is good.  I like the outline of the beams.

The red glimmer on the left comes from streamers of Christmas decorations about three or four metres long.

Seeing as these photos seem to be going up OK, I'll try one more from the beginning of the journey at Woy Woy. 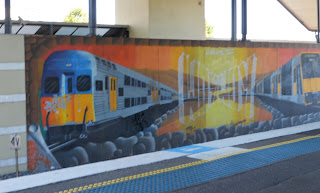 The station there was renovated quite a few years ago and there's now a transport hub with bus terminals, bicycles racks, toilets , lift access, taxi rank.  The buses always were there but the area is now covered.

This used to be a blank concrete wall, usually covered in slogans etc.  This photo shows a mural done quite a few years ago now.  The interurban trains are no longer the design shown here.  The mural shows signs of age and wear, but it hasn't been defaced.  The writing in the centre says Woy Woy, although it's a bit hard to read.

Spoke Milligan called the town the "largest above ground cemetery in the world," although that's been applied to a few other places too.  His mother lived there.  That's all changed.  Housing is cheaper than Sydney and many people commute to work each day.  There are lots of young families and a vast number of teenagers.  Unfortunately, many of them do not have a job and have time on their hands.  There's quite a bit of graffiti around the town.  However, like Sydney suburbs, it seems that if there is something like this mural, it's respected and not defaced and tagged.

Well, so far so good with the photos.  I have washing to hang on balcony and rubbish to take downstairs.  The lift broke down on the Thursday before Christmas.  Four men from Otis arrived yesterday and were here for some hours.  They took away a large piece of machinery so I hope it's soon returned.  Four flights down and back with a dodgy knee is more than I want.  However, today will be hot and I don't want it left in my store cupboard.  I twisted the knee at son's on Monday.

I also need to get back to knitting.  I have a pair of socks just over half done and I haven't touched my transatlantic shawl in at least two months.  Probably longer.

Oh your poor knee, four floors sounds such a long way, Hope Miss Otis gets her act together and has no regrets. Trains are magical, we only have goods trains really and a few boutique lines. They are great photos, I love them. I can't imagine some things in metric, still.

I wish all "street artists" had the same code. There was a lovely mural painted along the railway line between Blacktown and Doonside - as it has aged it has been convered in grafitti. Same thing at Harris Park Station.

Hope you're enjoying the slightly cooler, if somewhat muggier, weather today and that the lift is now operational!