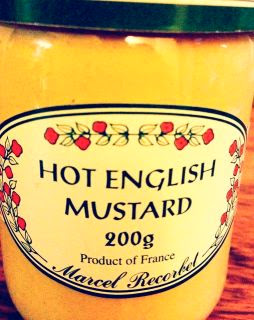 Here's a fun Saturday snippet which my son sent me.  He and one of his brothers love very hot mustards, chillies, sauces and so on.  He said this one was so-so, possibly because how can it be hot English mustard if made in France?

I've had a couple of days recovering after having Miss M, 11, here for some time.  We filled in our time well.  Powerhouse Museum, Maritime, Australian Museum.  We saw Tintin in 3D and ended the time with a family birthday party at favourite pizzeria near here for her uncle who had a significant birthday.

However, it was tiring.  After almost six hours at the Powerhouse, a favourite place of hers, she asked if she could go home as her feet were killing her.  Mine were killing me too, only a good three hours before hers.  She checked out all the new things she hadn't seen and then visited her favourites several times over.  We took lunch and just as well.  She made ham and salad bread rolls.  Fruit and water.  However for morning tea, I bought myself a small bottle of Schweppes drink and a very ho-hum supposedly date and ginger biscuit.  It wasn't very nice and the two together cost $7.50!

At the Australian Museum, she happily toured the exhibits taking a long video on her iPod.  I bought a bath toy at the shop there for her brother.  It was a small whale which swished its tail, gyrated and dived.  Yesterday his dad rang to say he'd been instructed to tell me this was his ONLY bath toy now.  In fact, he'd been dragged from the bath to eat his dinner.  He's a good eater so it all went quickly and he went back to the bath for more play.  I hit the jackpot with that toy.

Tintin was a bit of fun.  It was not a film of  any one story but a film in the manner of Tintin.  The rolling 3D waves churned my stomach.  The 3D was much better than the only other 3D film I had seen, Avatar, which didn't impress me on many levels.

That evening was the birthday party.  It was also a time of tremendous rain.  Son from Central Coast took two hours to get here instead of just over an hour.  Son from the western suburbs  took an hour to cover what normally takes about twenty minutes.  I was dreading the start as those two DILs can be a bit touchy.  I almost suggested some deep breathing, but things turned out well.  He's now in Perth with his wife as a birthday event for the significant number.  They found some very cheap fares, well cheap in comparison to  what it normally costs to get to Perth, and have gone  for the weekend.  Back on the red-eye flight arriving early in the morning here, Monday I think. And on to work.
Posted by Jan at 6:23 pm

Time with grandchildren can be e extremely tiring!

This rain is a pain - when so we get summer? I believe we asked this same question last year too!

We saw "A Christmas Carol" in 3D and the Imax - it was brilliant - we felt like we could reach out and touch the falling snow!

Send rain here please!!! The museum sounds very exciting and what expensive food though. We have a nice reasonably priced cafe in ours. Oh, what a great toy, he will be getting all pruny from too much time in the bath.
Yes, the mustard is very amusing!!!
Hope your feet have recovered now.