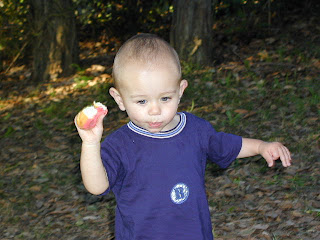 The just thirteen year old eldest grandchild decided to see how far he could push me through the week.  I've been doing a lot of minding them.  My son who was bashed is finally back at work full time.  Because he had so much time off, even justifiably, he had a lot to catch up so didn't take holidays over Christmas apart from the public holidays.  He's a manager for a not-for-profit company specialising in finding employment for those with severe disabilities. DIL took a week off but she works for a fairly inflexible company and couldn't get more time off, even without pay.  So the family has been stepping in, me in particular.  Here he is at a birthday party for mum when he was thirteen months old.  Now thirteen years old and feeling very independent.

"I promise I'll do it later, Grandma," he said.  I've seen what happens there before.  "Yes, I really, really will."

I felt up my sleeve.  Yes, there were  some cards still up there.  He forgets I had three boys, all of whom were thirteen at some stage  and all of whom seem to have  survived. "Andrew, you wouldn't perhaps be arguing with me, would you?"

Visions of his iPod or his new adult sized expensive bike being removed for a few days floated through his mind. "I'm very sorry, I apologise."  He wasn't happy, but he did apologise and did as I had asked so I said no more.

It's been tiring and I'm glad there's just one full week left.  His school goes back on the Monday and his susters' on the Wednesday.

Tomorrow I collect his cousin who is eleven.  She'll be here most of the week.  I don't anticipate problems with that.

It has meant I'm tired when I get home so I haven't been on the computer much at all.  Nor have I done much, although a sock has been faithfully accompanying me out there and back.  It has hardly left my bag.
Posted by Jan at 11:11 am

He was a cute toddle, but they change when they get older. I always think they come out the other side as nice grown up people again. It is really hard for working parents and it is lovely that your family all pull together. Yes, the loss of a treasured item for a while is a painful consequence!! I am sure you will be back to knitting when they go back to school!!

I look at my darling little grandsons and tears fill my eyes as I think about them growing up! Not that I have negative thoughts about their future, but I do see the loss of innocence and unconditional love!

It's so nice your grandson apologised; many wouldn't have. You were very wise in this situation, I hope I will be too!