a storm of crochet 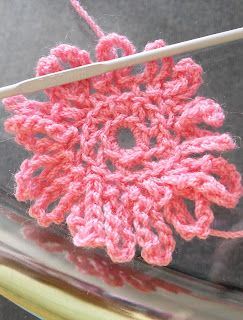 I've been fiddling with some of the patterns in the new book of crochet edgings and motifs of one sort or another.

I dug around and found my crochet hooks and pulled out a deeply buried ball of Cleckheaton 5 ply crepe which I've had for years.  I chose the crepe because as I finish a motif, I take a photo and then rip it back.  The crepe yarn is fairly tightly spun and can take this treatment several times before the yarn becomes unusable.

I have some photos of more edgings but think they must be still on my  big camera.

Bear in mind that none of these has been blocked and ends of yarn are there because I rip it out after photo.This top photo is called loop daisy.  Now, who would have guessed that name? Blocking or a press would improve this enormously. 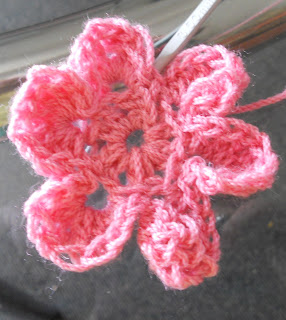 This second one is called a large simple flower.  Well, of course!  This one required that I pay attention and not forget that the pattern is written in American terms.  The height of each petal increases and then decreases and I needed to watch what I was doing here.

I need practice in keeping my tension even.  I suppose that will come with more practice.  I also see now that in lower left corner I must have put hook through the wrong part of the loop and made a hole.

We had several thunderstorms last night from early evening on.  The early storm had  heavy rain but little in the way of lightning or thunder.  Then it rained for a couple of hours and after that  we had a  deluge, accompanied by constant lightning and very loud thunder for quite a long time. 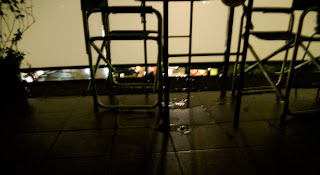 This last photo was taken about 11:00 pm last night after the rain had stopped, although there was  still lightning for several hours and some showers again this morning.  I walked through the lounge room and could see the rain water pooling on my balcony and forming drips along the framework of the table and chairs.

This photo was taken as I lay flat on my stomach on the lounge room floor to get the angle I was after.  As I said this morning to the friend who encourage me to get the DSLR, "Now look what you've got me doing!"  He just laughed.

Flat on the floor and I wondered if I'd be sleeping there!  I went to get up, was on one knee and moved the other leg to rise.  For about five minutes, every time I moved that leg, a severe cramp grabbed the back of my thigh.  It eventually eased and I carefully got up.
Posted by Jan at 2:30 pm

Such nice motifs you are crocheting. You are doing a great job, it takes a little while to learn a new craft properly: 10,000 hours?? Wow, so much rain, you may be getting sick of it!!

Ah the crazy things we do (especially when no one is watching!)