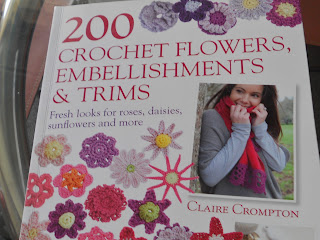 In the edition of YARN magazine published before Christmas I had a letter published.  All letter writers for that issue were promised a copy of this book.

Now I had totally forgotten all about that.  As I went to bus yesterday, I checked my letter box.  I haven't done that since deliveries resumed after New Year's day holiday as the lift here is still not operational.    Hopefully today.  I wasn't expecting anything important, most of my bills are paid by direct debit.  Several floors down also means several floors back up!  Not worth it to pull unaddressed advertising from my box.

I found a padded envelope from Yarn and put it in my basket, thinking that it didn't seem three months since last issue.  It was this book which  had forgotten about.  I really like it, so thanks to you all at YARN.  I can crochet and do so occasionally.  A few decorative flowers here, an edging or a bit of picot there.  My grandmother taught me when I was about twelve, I think.  She was an accomplished crocheter and did exquisite work in the finest of yarns on the tiniest of hooks, so small that it was easier to run a finger along the shaft to feel the hook than to peer at it to see it.  She became frustrated when I asked for directions, teaching was not a strong point of hers.  I remember being told to just look at what she had done and do the same.  Not much help to an absolute beginner. 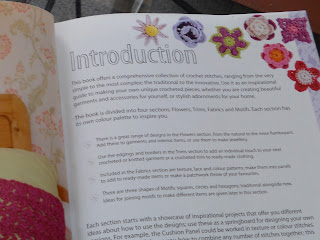 The book will help me improve my repertoire of crochet stitches.  There are pretty edgings, bits of lace and dozens of flowers and decorations.  It's clearly laid out and has both graphs and written instructions.  I've never followed a graph for crochet work before, always written instructions.  I certainly found them different to say the least.  While eating breakfast this morning on the balcony, I looked at a chart for a fairly simple flower.  It began in the middle of the chart shown.  I looked at each piece and then checked the written instructions to see if I had worked it out properly.

The book was published in USA so uses USA terms for the stitches.  However there is a chart of the corresponding British names for them.

So thanks to the girls at YARN for this.  I'll enjoy it.  I've always enjoyed  the magazine too and have subscribed several times.  When we moved and I knew I was moving again, I let the subscription lapse.  However, Once I was settled here, I subscribed again.  It's always a lovely surprise when the magazine arrives.  Before Christmas I realised that the last issue of the then current subscription was due.  This time I renewed for two years so don't need to worry about it for a while.  A whole eight issues will slide through my letter box.
Posted by Jan at 10:02 am

What a lovely and unexpected gift. I look at the crochet charts and wonder f I could follow them, I always use the charts in knitting, but the written pattern in crochet. My nan did lots of lovely crochet and lots of very fine work too. I hope you have some lovely work to show on your blog soon!!