I gave up and for what I think is the third time since I moved in ten months ago, I have put washing in the drier.  This rain here has just not stopped for the last 24 hours.  It's eased but never completely stopped and was very, very thick last night.  I had a big pile of underwear and really didn't want it draped around inside.  The air is very humid, understandably, and there's no breeze, so washing's all now in the drier.

I see by the Bureau of Meteorology website that rain was forecast for 24 of the 28 days this month. That's on top of the two months of it we've already had.  While I don't mind the cooler temperatures, it would be nice to have some sunshine.

More up north too, and big floods again in places like Gunnedah and Moree and the smaller towns in the area.  I have a friend whose mother in south eastern Queensland is preparing today to be flooded for the third time in three years.  Heartbreaking.

When Miss M, my granddaughter was here last week, she took the Striped Study Shawl, shown here off the model.  She loved it and begged me to make her one. After her bath or shower each night she wrapped it around herself over her pyjamas.  Weather was not what you'd normally class as shawl weather. I'm in a dilemma about doing this.  It's not hard, but there's a lot of knitting in it.  I just don't know and also need to balance things so I don't seem to be favouring one over the other.  The three in the other family get plenty of knitted things, but the shawl is obviously a big project.  I also don't want to make it to find she's completely moved on.

I'm trying to design an easy but pretty scarf or small shawl for someone whom I know on the net but whom I've never met.  She comes from down near 2paw Cindy and has just been diagnosed with a recurrence of the cancer she thought she'd beaten many years ago.  I want something small but cosy for their winter and quick to do so I can get it off to her.  I have settled on the design and started it last night in some sock wool with variegated colours.  After doing three repeats of the pattern, I can see that the multi-coloured yarn kills the design.  I'll have to do some stash diving for a plain colour.  I may be gone some time!

I hunted around on the internet for edgings and found one I liked.  I was planning on a shaped scarf with gradual increases but think I will make it straight with the knitted on edging on one edge.

As I said, it was wet yesterday.  I wandered around the place with my camera in hand.  I took about twenty photos for Project 365.  When I loaded them to my computer I wasn't satisfied  with any of them and deleted quite a few. 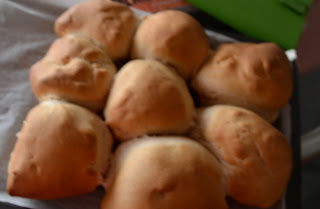 So I turned to comfort food.  I had no bread in the house and it was too wet  to even think about going downstairs to service station to get any.  So I made rolls and very tasty they are too.  I've frozen all but one in individual ziplock bags, so I'll have stuff for lunch for some days yet.  They are very substantial.  I'll use the larger rolls as mini-loaves and slice them.  I have to freeze a big loaf anyway as it goes mouldy before I can use it all up.

These are very filling and easy. I have used a mix of flours because of what I had in the pantry, but don't take the mix as prescriptive.

Atta flour came from Coles in a plastic container of one kilo.  It's a light wholemeal, used for making Indian flatbreads.  My brother used some in ordinary bread last week, so I've tried it now.

Today's lunch will be another one I've thawed with some smoked salmon and salad.

More cooking.  This time a pasta with blue cheese sauce.  This did me two main meals but could have stretched to three.

Mum's town (Bingara) is flooded in but mum is highly unlikely to go under water as everyone is compelled to build their houses at least one metre higher than the land around them. She has the essentials which is good because she's a bit concerned about taking her car out of the water-logged driveway!

Yum - fresh bread. We are still working our way through a loaf I bought at Bakers' Delight on Tuesday. OG is very fond of smoked salmon - if her were there, you wouldn't have got any!! LOL

It is heartbreaking to see the floods again. My sister works in insurance and she has ben so busy trying to asees the damage for people. I hope your friend's mum is safe. I am also sorry to read of your friend's illness, I know she will be comforted by a shawl knitted with such care and thoughtfulness. I am in awe of your breadmaking skills, it is something I'd like to face this year: my fear of yeast!!
We had 6mm and 2mm of rain last month. How we long for rain and coolness, it is all higgledy piggledy. Mm, blue cheese!!!