a little bit of sunshine 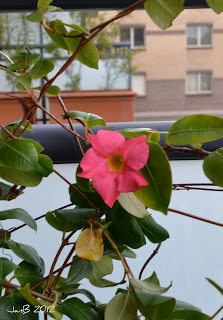 I made a determined effort the other day and restarted my languishing Transatlantic Shawl.  It's not hard, it looks good, but I couldn't get into it for at least three  months.  I've done about another 25 rows on it and am really to the point  where the border is worked according to the pattern.  However I still have several balls of both colours so will keep going for a  while.  No photos yet.  There are lots of stitches on a fairly long cable.  They move around easily still but there are too many to stretch out to see the interesting pattern done with slip stitches.

There's some sunshine here  this evening.  I'd forgotten what it looked and felt like!  It comes after a massive storm over Sydney and the Central Coast and down the coast too.  Hail, very dark, thunder and lightning.  Up near my son's place on the coast it was described as a mini cyclone.

It's made photos for Project 365 difficult.  I haven't wanted to venture too far  from home a the rain arrives suddenly with little warning.  There are just so many photos one can take around the place.  However, I am now just under 80%.  The more I add, the longer it takes to go up a percentage point.  It was quick when there were only a few photos.

I was playing around with the aperture settings this morning with the flower.  A smaller opening, f stop, increases the clarity of the depth of the field.  (Smaller opening equals larger number on actual setting!)  I still have heaps to learn, but am making progress.  This is f10. 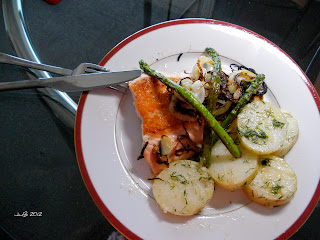 The second photo was tonight's dinner.  Tasmanian salmon, crunchy onion rings, some a bit too crunchy as I turned my back for a minute on them.  They tasted fine.  Asparagus cooked in the pan with the fish and some baby chat potatoes  with butter and fresh dill.  All covered with a hefty squeeze of fresh limes  which are  cheap at the moment.   I cooked the salmon skin side  down first in just a little oil. Then I turned it.   It was very good as the piece was uniformly thick down the length, making cooking easier.  Followed by rockmelon.

There was just one  downside.  I had intended to open a bottle of wine.  I was almost finished the meal when I realised it was still in the fridge.  Another time perhaps.  I very rarely have alcohol when I'm eating by myself, so just forgot.  I have plenty in the house but prefer to share than to open something with jut me to drink it.
Posted by Jan at 7:20 pm

Wasn't it wonderful to see sunshine today although that storm, like yesterday's and the day's before, were quite heavy. MY LQS was flooded so I have no class on Monday. I might go down and see if they need a hand with anything.

I am glad you are having a brief break from the bad weather. I am looking forward to rain this week!! Your camera work is great, I do think reading the book really helps too. I just read my car radio book and found out hot to make the start up volume louder!!
Yum, your tea looks delicious, I burned my finger on some caramelised onion last week. I hope you read a photo point in your shawl soon, it sounds so nice!!