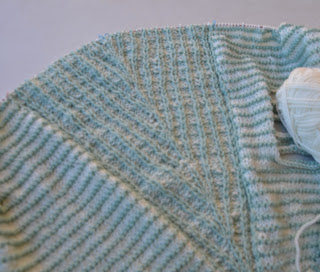 I could not find my long cable anywhere so have taken these rather poor photos of the transatlantic Shawl by Stephen West in progress.

There is a lot of shawl bunched up on either side of the patterned centre.  The wider part of the centre panel will be (eventually), the bottom of the shawl and will be a plain border. It will need a fairly severe blocking, I think, and the three buttonholes on the right as an accent need to have an edging crocheted around them.

It's an interesting pattern done with slipped stitches.  Once I start it I remember the rows, but usually have the pattern beside me  to mark of each row as I do it.  If I stop before a pattern repeat, I can then easily find where I'm up to.  The contrast colour is a soft gumleaf green/grey.

Aside:  I haven't had problems with Blogger and picture placement for ages.  This afternoon is a pain.  Placement keeps changing by itself and the text is giving itself indents where I don't want them! Grrr!

I mentioned that Miss 11 had greatly admired my Striped Study shawl and asked for one.  I pondered for quite a while what to do.  The shawl is very big and although easy, would take a while to duplicate.  I finally decided I would lend it to her.  I took it up there last Saturday when I went to have a haircut.  I'd explained what I was doing to her parents beforehand so they knew the terms.

I told her she was welcome to keep it as long as she wanted it and used it.  I didn't want it used as a bed for the kittens or a roof for a cubby over a couple of chairs with her younger brother.  Or anything else like  that.  If she lost interest in it, as she may well do, I would like it back, but until then she could have it.  She was overwhelmed and so was her mother.  Mum is not in the least crafty as far as fibre goes and had not realised just how big or attractive the shawl was.  She's very fussy and will make sure it's well treated and will wash it carefully if needed.  I never have problems giving her anything knitted as she takes care with them.

A couple of years ago about this  time, I had a two meals in the Members' café  in the National Gallery in Canberra.  This was my attempt to duplicate the salad I had there.  I couldn't remember some of the ingredients but this was very nice in  its place.  I had a dressing waiting of fresh lime juice and olive oil, although I later remembered that there was probably a sprinkle of balsamic vinegar there too. 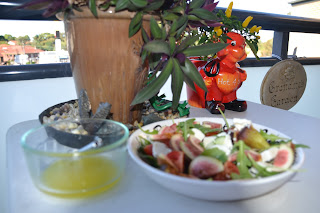 Fresh rocket, some fresh figs quartered and then sliced more. Truss tiny tomatoes, some cucumber and some sheep's milk fetta.  I was used to the Bulgarian sheep's milk fetta with the white container with a green strip around the top.  I bought some a while ago, not thinking that three or four of us used to use it and now there was only me.  It went off.  I found a foil pack of the Lemnos brand sheep's milk fetta an  bought that.  A much smaller and more manageable amount.  The cheese was good with a pleasant firm texture and a lovely salty flavour. 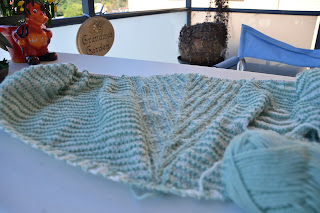 I had made some more bread rolls with plain flour, spelt flour and the Indian wholemeal Atta flour.  They were as good as the first lot.  I ate dinner in stages, a smaller roll with the salad to start with and then a pork sausage.  The rest of the sausages are in a container for another day.  Finished with a fresh sweet, white peach.

I may even do some more on the shawl tonight while watching the cricket or whatever.

Oh, I had a look at the pattern and I see how it goes. I think your colours are lovely and I agree about the crocheted accents on the big buttonholes.
I love your creative solution for the shawl and Miss 11!! very clever.
There is too much in some packets of food for 'ones'. Yum, nice salad, it looks delicious and you have such a good memory!! I am un-casting off while I watch TV tonight, so I hope your knitting is more successful!!

Wow! That is a very brave move on your part Nanna/Grandma! I hope it works out well for all of you - at least DIL can be trusted.