"Running around like a  headless chook" was one of the sayings my mother used to use.  It was the third anniversary of her death just a few days ago, so I feel justified in using it.

If you've ever seen a headless chook running around, you'll know just what I've been like this week.  Here, there, and everywhere.  I hope I can string two coherent thoughts  together.  When the date of her death rolled around, it hit me in the stomach.  I haven't always had this reaction but I certainly did this year.  It seemed like yesterday and a thousand years ago simultaneously.  I miss her, her stubbornness, her support, her "brainwaves" as she called them.  I miss her love of family especially her great grandchildren.  I remember her playing Monopoly with Miss now eleven when said miss was four.  No one could find the dice for the set so they pretended, closing their hands and shaking, then flinging the imaginary dice on the board and counting the squares.  Moo well into her 80s and Miss Four.

Eldest son had the back operation a week ago.  I don't think any of us realised how much stress this has been in our lives.  He's been in a drug induced haze for several months because of the pain.  The operation was longer and much more complicated than expected as the damage was much worse than MRIs showed.  However, when he woke up, he could tell that the nerve pain in his leg had gone.  Agony, but this time from the operation where a large chunk of  bone was removed  from his spine.  Instead of two days in hospital, he was six days.  He's getting around in what is really a shuffle and he can just negotiate stairs.  However, I can now hear hope in his voice instead of despondency like before.  I have a lovely picture  of the incision some inches long instead of keyhole.  There's no identifying features in it, but I haven't asked if I could use it, so won't post it.  Several inches also of plumber's crack.


The result has been a huge relief, much more than I imagined. It was some hours before I heard how things  went.  I had a sudden awful thought that everything had failed and DIL couldn't tell me.  Nonsense I know, but the brain does silly things when stressed.  The reason was that everything took much longer than anticipated.  I wasn't even thinking about it when the thought popped into my mind. I thought I was handling  things well. Apparently not.  I've had trouble concentrating on anything much.  One morning I used my coffee machine to froth the milk.  Except it wasn't the milk, it was the coffee.  Frothing it destroyed the texture and I had to grind more coffee  and do a second cup. 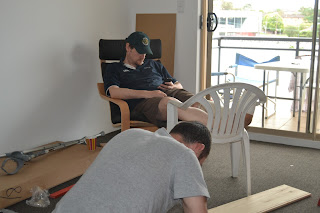 Fortunately most of the effects of the bathroom fall have gone.  There's residual soreness but nothing like the first couple of days when even breathing hurt.

Today is the anniversary of my move to here.  The year has gone quickly.  I've achieved a lot, although  I still find ways of doing things or placing things usefully.  I don't deliberately concentrate on the past, but being by myself has allowed my brain to process more stuff than when I was with son and DIL.  Flashes of insight into behaviour and reactions to events sort of thing.

The photo shows #2 son putting together flatpack furniture on moving day.  I have almost no photos specifically from that day.  I must have been busy.  Other son had just then had the first ankle reconstruction.

So I have celebrated.  I have bought an iPad.  It is something I have been considering for over six months now. I saw a friend use his some days ago in a way I could have done myself.  He preaches from his.  Brilliant.  Much better than a a million pieces of paper which I always nervously check to make sure they are in the right order. 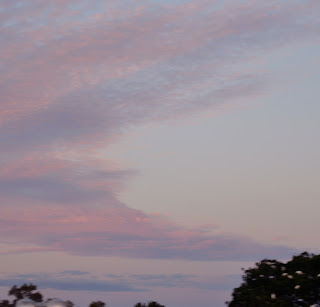 I haven't even told #1 son about this.  He could fix up what I can't do in five minutes flat,  I refuse to even think of asking him.  He needs his rest to recover.  So #3 son is coming down at the weekend to do what I can't.  When my wifi was  first set up, #1 son did his usual fantastic job of setting it up.  He now works as a management consultant but he's a genius with computers and has been since his teens.  He set it up very securely, too securely for me to access.  I know what has to be done but can't get in to do it,  so Youngest  son, also computer whizz is coming  down to do a few bits and pieces on Sunday.  Then I will tell others of the fait accompli.  I've transferred the apps I use from my iPhone to the iPad, done some tidying up and such.

So I'm looking forward to a quiet week next week.  I'm planning on seeing Judy Dench and Maggie Smith  in their new film released yesterday.

The picture is something serene, sunset looking north east from my balcony.  I have several of these from this aspect and moving around to pink and gold puffy clouds in the west.

I can't believe it is a year already?? Where has the time gone? I a glad you are happy in your new place. I am also glad the news about your #1 son continues to be good. I agree, sometimes it is the little things that tells us we are more worried than we think.
Typical of a computer person to make the wifi so secure that you can't access it!! Good thing you have son #3!! Happy iPadding.
I think my mum will enjoy that film, and I will too: it is full of wonderful people!!!

Enjoy the iPad; good to hear about the healing of the bathroom fall and your son's recovery. I hope you have some time to relax now too. And a beautiful sunset photo.

As we Orthodox say, may your mother's memory be eternal! (and I have no doubt it will be through you and all those who knew her).

I'd be interested to hear your thoughts on the new film with Judi Dench and Maggie Smith; it does look interesting.

Enjoy the iPad Jan! I'm glad you're celebrating this milestone.