on the wings of a dove, sorry cockatoo 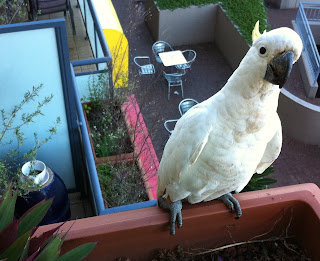 I think I've mentioned the cockatoos here before.  I normally don't mind them, although they are incredibly noisy in the late afternoon.  Anywhere between twenty - forty or so, sweep in and proclaim their reign.  They chase the seagulls away, no great loss, and the disgusting scavengers, the ibis.  When they are really in the war mood, they even dislodge the ibis from their favourite roosting tree and we have loud complaining noises added to the cockatoos' screeches.

They then spend the next hour or so, wheeling around the semi-enclosed area here, hunting down any stray ibis or gulls.  Even the Indian mynahs are intimidated by them.  Mynahs are not intimidated by very much, I've found, but they've met their match in the cockies.

The larrikins among them grab the electrical wires which are strung over Parramatta  Road.  Some grab by beaks, others by claws.  They then perform acrobatic moves and swing in 360° around the wire over peak hour traffic.  Others sit on the top of the street lights over the road and then slide down the sloping strut which holds the light out from the pole.  They remind me of children on a slippery slide.  When they reach the pole after sliding down, they do it all again. 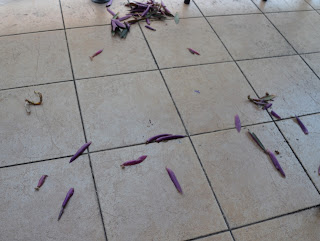 Usually they don't come anywhere near the balconies, preferring to fly in circles overhead.  Fortunately our railings are metal tubing, not wood as cockatoos can swiftly destroy wooden rails.  The other day I looked up to find three of them on my balcony rail, parading along it from one to the other, then back again.  I didn't really want them there so waved my arms at them.  Absolutely no notice was taken.

Then I discovered they were biting one of my pot plants which was on the small table out there.  More waves, followed by no action at all.  So I went outside.  They stood their ground. Indeed, as you can see, I was given the evil eye. I am actually less than half a metre away from the cockatoo here and as you can also see it does not appear to  want to move.

On Thursday afternoon, I returned from seeing The Great Exotic Marigold Hotel which I highly recommend for a good laugh and a slice of life in a different culture.  I found this mess all over the balcony tiles and more mess on the table.  Most of the middle of the plant had been ripped out and then discarded when dropped.  I've replanted the stems and moved the plant away from the rail, so the birds can't be comfortable on the rail while pulling my plant apart.  It's fairly hardy, so I think it will be OK. 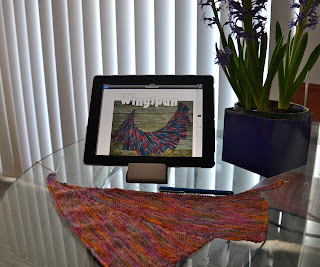 And birds of a different sort.  I really think I'm totally bored with what I have on the needles.  A very plain pair of socks and  the Transatlantic shawl.  I found Wingspan which is a free pattern on Ravelry.  The yarn is some of Ailsa's beautiful 50/50 merino and silk.  I think a longer colour repeat would be better for the pattern, but I had this and love knitting with it. There are eight short row triangles and I'm onto the  third.  Very easy but effective.  Each triangle is partly built on the preceding one and another sixteen stitches are cast on for the base of it.

Click on picture to enlarge and see the pattern more clearly.
Posted by Jan at 11:37 am

I think I will try and see "The Great Exotic Marigold Hotel".

On other matters, cockatoos are destructive, aren't they. And amazingly no fear as your photo and description shows. I have seen more of them lately than I can recall in years past. I hope your plants are safe from now on...

And I am in awe of your knitting skills; and still greatly treasure a scarf you made for me. Happy knitting.

Oh Cockies,had the priveledge to see the Carnaby Cockies at Munglinup Beach,got some nice pics too,thank you for visiting,Im remembering my Dad by growing this vegie garden,if I can keep DH out of it,Im sure Ill get something out of that patch!! Tipping out the spud pot when they die off,so looking forward to finding out how many are in there,baby or giant,I dont care!!

Oh I can see the pattern very clearly, it looks great.
The word 'cockies' brings back childhood memories, We see the flocks wheeling at the dam in the tops of the trees screeching at the top of their lings. They can be very scary and it is sad that they ate your plant. I don't know what they are afraid of and I am pretty sure you couldn't have a gun-type bird scarer on your balcony!!

I've been thinking I'd like an iPad but can't justify the expense. I need to replace my two year old iPod which has died too!