Not a good week in various ways.  One day was the hottest day we've had this summer, 34°C here.  One of the very few days over 30°C that Sydney has had.  Now I'm not bothered by that, I like the mid-20s but there's been so little hot weather neither I nor many others were acclimatised. Horrible day and high humidity as  well.

We've had weeks and weeks of rain.  There are vast quantities of water making their way into outback NSW from the Queensland floods.  Now added to that is the huge amount of rain across practically the whole state.  Broken Hill had six months rain in a few hours the other day.  The rain trough moved in and took up residence and shows no inclination to move.  Everything here was already saturated  and the ground is at what was called field saturation point when I did Agriculture.  That means it goes squelch, squelch when you tread on it.  No more moisture can be taken in.

Little wonder then that 75% of NSW is either flooded or on a flood alert or watch.  Watch is slightly below alert, but when it pours all day, what's the difference?

DIL who volunteers with SES is busy.  Out at night and doing full-time work too.  Last night she was at  Wilberforce on the Hawkesbury River, down stream from Warragamba Dam which is now at 100% capacity.  Not so long ago it was just under 30%.  She was there from 6:00 pm till 9:00 am this morning.  She came home for a sleep and was back there at 4:30 this afternoon for another night.  She has most of the qualifications for all work, chain saw, trees, electrical, fires, floods, boats, roof work and more and does a lot of training herself now.  This time it's all hands needed on deck.

The flying rat squadron shown here has been on slim pickings this week here.  With so much rain, they've had a hard  time getting scraps from people eating while outside McD's.  This lot have been here along the roof  pretty well all day.  They have  a vantage point and if something is dropped they descend en masse in their rush to be first to grab it.

My son who had the bad fall down fire escape stairs some fourteen months ago is facing yet another operation.  He used to be a runner and went every day.  With the broken ankles, pretty well all strenuous physical activity stopped.  When the ankles were fixed he gradually became more mobile.  Not at all back to running, but at least doing physio and swimming.  It then became apparent that his back had also been injured in the fall.  It became worse and worse and he's had MRIs and scans etc.  Also steroid injections which for him were useless.  The pain has been terrible and the fellow who weaned himself off morphine after  ankle ops in a few days has been on the absolute maximum possible for at least three weeks.  He loathes taking painkillers of any type at any time.

Last week he went to doctor for another script, it's tightly controlled here and only 20 tablets at a time can be prescribed.  She took one look at him and listened to the worsening symptoms and was alarmed at some new developments.  She sent him straight to Royal Prince Alfred Hospital where he was for a couple of days.

His neurosurgeon  and various other surgeons have been insisting to the insurance company that he must have operation to repair damage or they will be looking at a much bigger scenario.  It's next Friday and we just have to get him through this week.  Prince Alfred is close to them if anything should develop, although the operation will be in a private hospital with same surgeon who is top specialist in RPA. 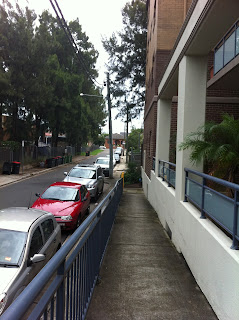 Yesterday I spent most of the day hassling Woolworths re delivery of grocery order.  Four emails and seven phone calls later, I thought the problem was fixed.  Not so.  The replacement order this morning was still missing major items.  I gave up and took a refund.  Now I admit, I don't usually have problems.  Occasionally the wrong product is picked.  If I won't use it, I ring and get a refund.  If I will use it, I usually let it slide.  This was over the top.

Last picture is looking up the street out the back from which I get my address.  I actually have two addresses, one for this street and the other for the main road outside which has a four (!!!) figure street number and is used only by the Water Board.

Off to stir my chicken curry.  It's cool today so a good day for curry.  Lots of vegetables, some leftover chicken taken off hte bone and some Korma paste which was open in fridge.  Smells good and I should have a couple of meals to freeze.

I saw all the rain and the floods on the news tonight. It seems barely a few years ago that we were in drought. I hope the happy medium prevails soon. I am sorry to read your son is so unwell and I hope the operation is very successful and alleviates his pain and fixes the problem once and for all.
I made chicken curry as well: snap!!

I was shocked to read the 75% statistic on the ABC new site today; Lord, have mercy.

Prayers for the safety of, and thanks for the great work, your DIL and all the emergency services. And prayers for you son.

Let's not mention the weather... I'm so sorry to read this about your son. How everything can change in an instant, eh? I do hope that this next operation turns his health around. I expect you're like me - you can't stop worrying, even when they're mature adults.