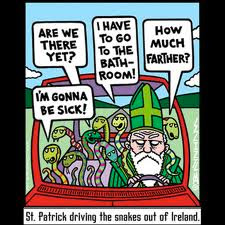 This has not been a wonderful week for me on a variety of fronts and it's raining yet again here today, so here's a little bit of humour as it's St Patrick's Day today.  St Patrick driving the snakes from Ireland.  I rather like his expression, it mirrors mine for much of the week.

The week started quite well.  Last Sunday was an absolutely beautiful day.  Sunny, not very humid, a pleasant breeze.  I came out of church and thought I'd walk down the hill to where I used to live with son and DIL.  Son was at home I knew.  Major back problems getting worse daily and an operation scheduled for yesterday.  Extreme pain, lots of heavy duty painkillers.  He was suffering from cabin fever as the pain was so  bad he was confined to just sitting in a special chair.

I walked down Enmore Road five minutes to Sultan's Table, an unassuming looking place with great service and amazing food.  It had just opened so I ordered some chicken and a variety of very good dips.  It's a good place for  an easy meal, but I knew my son would need takeaway.  And cheap.  Very cheap.  After I preached at church a few months a go, my friend and I had a wonderful meal which cost $23 for the two of us together.

My son was in pain although he had a new machine which sent two different impulses through his back reducing his pain enough to allow for a decrease in one of the morphine medications.  We ate outside upstairs so he could be out of the room for a while.  It was good to see him.

Monday morning I had a fall here.  The shower is over the bath here and I have been ultra careful not to slip.  The bath itself has never been particularly slippery, but this time I slipped.  I whacked my ribs and one side very hard across the edge of the bath, and then fell backwards into it.  I lay there a few minutes assessing the situation and finally decided nothing was broken.  With a great deal of effort I got out.  I was SORE.

I felt quite bad for a couple of days as more sore spots emerged.  I'm now a lot better although I have some very nasty bruises, and I've bought a non-slip, large mat for the bath while I consider how I want to renovate the room and have a proper shower recess. Bathmat already has non-slip stuff under it. 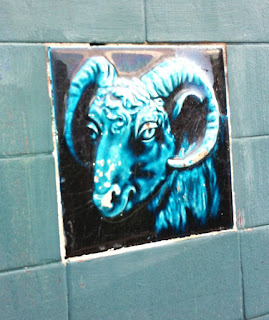 I've known this area since childhood, my grandmother lived here and I've lived around here for a long time.  I walked past the corner  shop yesterday and saw this tile.  It's raised in the design. There are other similar tiles painted in various spots and I can see where some tiles were removed.  I guess it was once a butchers's shop but that must have been a very long time ago.  I can't remember my grandmother talking about it at  all.

Son's operation was late yesterday.  He's still in pain but thinks the leg pain from the damaged nerve is gone.  He had a rough night but has been up and for a short walk.  The pain seems mostly now to be post-opearation pain.   The operation was much longer and more involved than the MRIs and scans had suggested.  The surgeon told him this morning that the disc was totally stuck to bone and that he removed a lump of bone at least the size of a stock cube.  No wonder he still hurts.  Every thing about the operation was larger and longer than expected.  Still, hopefully he's on the mend now, although I think his recovery will be long.  I was quite nervous, back operations, nerves, bones, spinal cords, all major things.

Just to show this is supposedly a knitting blog, here's a link #3 son sent me.  50 knitted and blocked, life sized bees.  Buzz, buzz.
Posted by Jan at 5:55 pm

Oh my; so sorry to read of your fall Jan. I am glad you are well and recovering. Continued prayers for you, and your son.

I loved the St Patrick's cartoon and the goat tile is wonderful.

Oh no! I hope you are completely recovered now and that your son is feeling much better after the operation.