...with one fishball.  Lyrics, if you can call them that are here. Second song down the page.  I first heard this song many years ago, probably on the ABC Argonauts session.  It comes to mind at times and now it's an earworm, stuck in my head.  I made fishcakes tonight and the song came unbidden to mind.

I had bought a smoked salmon steak, not the flat slices but a steak.  I cooked two potatoes, added chopped leftover vegetables, some onion and chilli with the seeds.  One lovely fresh egg and I flaked the salmon into it and made six decent sized fish cakes.  Two were my dinner served with salad and fresh green beans. Don't forget the lemon juice.

I have actually been working on a sock this week and may even get it finished soonish.  The first was finished before Christmas.  The weather has been too bad to be out and I've been watching the cricket. 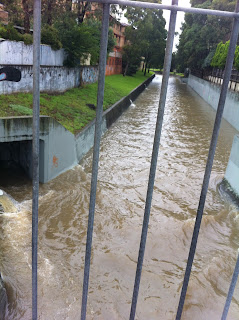 Yesterday was the wettest in Sydney for a very long time indeed.  The street out the back of here runs down to the stormwater canal and is on a slight slope.  A young man told me in the lift today that the water was cascading down the street calf high for him.  The intersection out the front was about half a metre deep with water from the street opposite and from part of the main road leading west.

Before I bought here, I was quite impressed with a townhouse in Riverside Crescent in Marrickville but it went for more that I wanted to pay out.  Riverside Crescent should have been a warning.  It looked through trees  to the golf course and across to Cooks River.  Yesterday cars were floating in the street and some were submerged.  The townhouse would not have been wet but the underground carpark was flooded.  A high price was a blessing in disguise.

The picture shows the stormwater canal a few yards  from me.  It had been higher than this an hour earlier.  My son suggested pooh sticks but I replied branches would have been needed.  The water was very deep and moving very fast.

Son needing back operation will finally have it next Friday.  Talk about being given the runaround. He now has a machine, not a TENS but an updated machine which delivers electrical impulses to confound the nerves.  He's hoping this will allow him to reduce the drugs he's on.  Maximum doses of Tramadol, Endone, Mobic and Valium with the shortest allowable interval between doses.  He hates them.  The main problem is that the pain has been so intense for so long and the pain killers so strong, that he really is not at his best to go into the operation.  Recovery time will be painful but less so than he's finding now. It will also be lengthy.

Off to Mittagong tomorrow.  We haven't seen our friends there for several months.  I've even baked a cake in celebration.
Posted by Jan at 8:30 pm

Well, there are some interesting lyrics and poems over there!! Your salmon steak sounds delicious I always have one when they are on special and I feel very posh. There must be lemon juice, always.
I am so glad you are safe and dry. That is an awful lot of water. I can't believe how much rain has fallen. Poo sticks: I love that game.
I am glad you son's operation is finally scheduled and I hope he can endure the days until it comes around.
Have a lovely time visiting your friends, and enjoy your celebration cake!!!

Hope you had a wonderful day visiting your friends down south and eating cake. :)

Prayers for your son, and thanks he is getting the operation.

And I had no idea there was flooding in Marrickville; so much water...

Wow! How quickly we forget. After days of fine weather we forget that just a few weeks ago we were inundated!