I've been busy here today.  First off I went shopping early and scored several trays of meat at reduced prices after the long, long weekend.  They still had some days before the use by date.

It's quite chilly here today with a strong southerly wind, so it's really been a good day to be inside.  I know many who live in places where they would call 9° C warm, but it's a bit of a shock to the system here.  I used to live about 20 minutes walk away from here and have seen the thermometer down  to a whisker above zero, but that was very unusual. 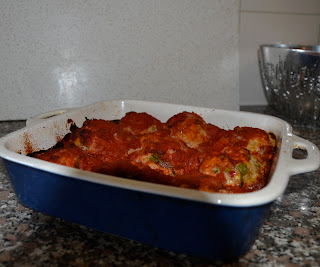 First cab off the rank was  this dish.  Pork meatballs cooked in diced  tomatoes.  Lots of garlic and chilli in them and other flavourings a well.  When they are cool, I'll put them into containers and serve meal sized portions.

I covered them with foil and cooked them slowly as my oven is fierce these days.  They have some leftover rice from last night.  I used to make these when sons were small but used uncooked rice.  They need lots of liquid for that and need to be covered.  When done, the rice pops out of the meatball .  Known as hedgehogs, but  I suppose  we should call them echidnas down here.  They were a family favourite. 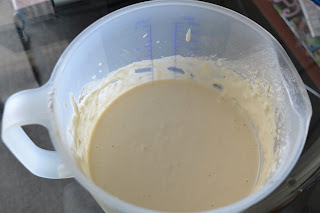 I have been eyeing off a recipe for crumpets from the River Cottage Bread Book.  This is quite the best book I have ever seen on bread and I've seen lots.  I started cooking with yeast when I was nine or ten, making hot cross buns one afternoon when my mother was out.  They are really not like  crumpets down here which are always toasted.  They are filling!  They start out with a mix of warm water and milk, some flour and yeast.

It doesn't look like  much but cover and leave it till it's all bubbly.  The book suggests an hour but says up to three hours is fine. 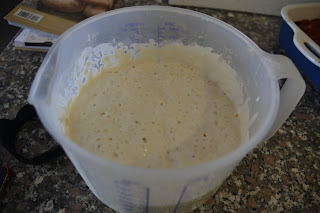 It will then look like this with the surface covered with bubbles.  Some salt and baking powder are  whisked in and that's it for the mixing.  I was sure I had baking powder but couldn't find it, even after moving things on the baking shelf of my cupboard.  The service station underneath here is a min supermarket (at maxi prices usually), but as I needed more milk I thought I'd have a look.  No luck.  I think they may have been a bit lighter if I had used it but they were fine.  I tested them thoroughly! 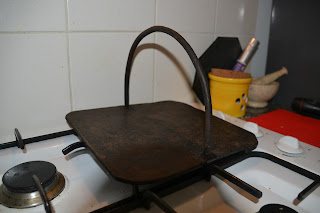 This cast iron griddle is very old.  I don't know quite how old it is but my grandmother used to cook us pikelets for Sunday evening when I was young.  She always said it was quite old, even then.  So my guess is that it's probably well over a hundred years. It's cast iron, handmade fairly roughly along the edges.  A corner is cut off so I think it may have been made from scrap metal.  It's quite thick and retains the heat for a long time.  I cleaned it up, I haven't used it for years and set off to make crumpets. 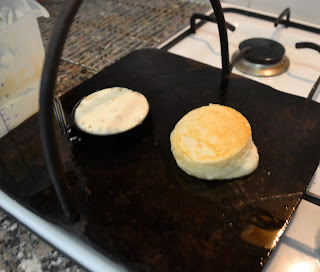 The recipe suggest using rings.  I looked and looked for weeks for crumpet sized rings but could find only these egg rings.  They certainly made a neat job of the crumpet but were difficult to use.  They need to be wider and shallower.

Here are the first two.  They were thick and took a long time to  cook.  The writer of the book says to make them just before a winter afternoon tea.  They can be split or left whole and eaten dripping with butter.  Any leftovers, unlikely he says, can be toasted which is how we usually eat them down here.  I gave up on the rings.  They were awkward to use.  I also gave up on oiling the griddle and used what I have always used for pikelets.  A slice of raw potato.  It does a fantastic job, producing a clean shiny brown surface on the pikelet, or in this case, crumpet.  Cut a slice from the potato, rub griddle or electric frypan with the big bit of potato, cut side down.  Repeat when needed.  Cut off another bit when first surface dries  too  much. 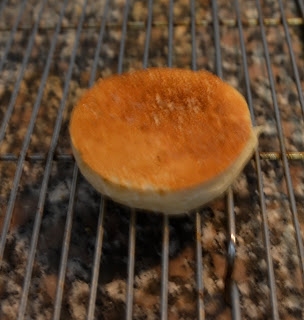 BTW, a potato used like this is good if you are caught in the rain and trying to drive home from camping when the windscreen wipers fail.  If outside of windscreen is rubbed with the potato, the rain runs straight down and the driver can see through the glass.  Don't ask me how I can tell you this works.

I can tell you they were nice and hot but filling.  I made half a batch as there's only one of me, and even after being greedy, there are quite few left.  They made me nostalgic  for nana's pikelets.  She also made johnny cakes which are really nothing more than fried scone.  We put lemon juice and sugar on both of these, although my sister always put vegemite on hers..  Stodge really but filling and cheap.  She was the eldest of nine and her husband was the middle of fifteen children so I suppose cheap and filling were necessary qualities for food when she grew up.

Now I have the washing up to do, and you should see my kitchen floor!

So here's the recipe:*


Mix, flour, milk, water and yeast  till mixed but runny.  Cover and leave 1-3 hours till surface is covered  with bubbles.  Stir in the salt and baking powder.  Hat griddle, frypan or whatever you use,  and oil it or use potato. Fill crumpet rings and cook till bubbles rise to surface. Turn and cook other side.  Serve with butter and honey or jam,

Don't use egg rings as I did, even the larger than usual rings.   Crumpet sized rings would be much better.  If you don't use rings, it may help to make batter a bit thicker with some more flour.  Leftovers can be toasted.

MrsDrWho's family, who are Scottish, regularity make crumpets like that but they had trouble finding the rungs too. I didn't know the potato trick. Maybe it is the starch?? Yum!!

And fascinating potato trick!; thank you. And, yes, it is getting cool now, especially of a morning.