the cat in the hat 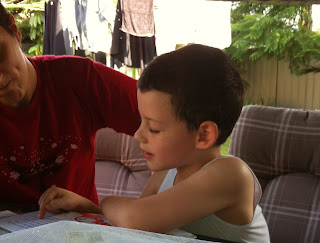 Yesterday DIL and I had an early start to the day and drove to the Central Coast.  She was being the world's best auntie again and taking my two grandchildren to see The Lorax at a local cinema.  I had already planned to go for a rather overdue haircut so was glad to be driven.

They enjoyed the movie and I enjoyed seeing masses of hair being cut and a new colour given me.  It was so pleasant to see some sun after the downpours of earlier in the week and we sat outside under the shelter there.  Other DIL took advantage of the sun and did a pile of washing.

A simple lunch of bread rolls and salad was enjoyed and then Master Six decided to show off his reading ability.  He and reading have just clicked and they are visiting the local library regularly for more books to satisfy his appetite for reading.  You can see from the picture how happy he is to show off to world's best auntie.  He's reading a Seuss book, The Cat in the Hat and enjoying the silly concepts.  I know Seuss appeals to children but I really don't like them.  The only ones my sons had were presents as I would not buy them.  I was also shown Merit Certificates from school for both of them and an adult crossword from the paper which Miss 10 had done all by herself with help from my son for just one clue.  I doubt that "ossify" is a word known by many ten year olds.

We had a great day and returned in the early evening.  I was glad I had leftovers I could have for dinner with a bit of re-heating.

The middle son did get water in the garage from the door shown in photo below.  About a foot and they are cleaning it out today.  The whole area was saturated, the Cumberland Highway was blocked and many streets were flooded. 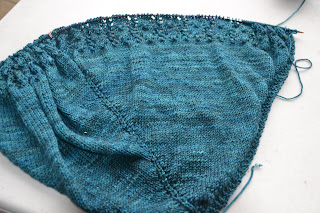 This is Brangian, somewhat overcrowded on the short cable.  I need to go up a size. I think there are about 220 stitches there and the patter is the first repeat of the first  char.  Another two to go before I change charts.  The yarn is lovely and I like the colours with subtle changes in colour like ocean depths.  The colour is called Cousteau which is a good name for it.

Son saw the surgeon  this week for the first visit since operation five weeks ago. The surgeon was surprised at the progress he has made and said he was six weeks ahead of expectations.  That's what son is like.  He does his research and works his plans and is very determined.

He's been give the OK to expand activities but has been warned he'll always need to be careful.  He's never to lift heavy stuff or do heavy gardening or labouring.  These are not his strong points  but he would help friends out.  Now he will be able to refuse knowing that they are forbidden.  Ask for computer help and he'll go out of his way to oblige.  He won't be able to sit or stand for long periods ever, either.  He's looking forward to being able to swim again, so he's hoping for a few more warm days to go to the beach.  Much better than an indoor pool.   We are all thankful for the success of this but there are other discs which are also damaged.  Nowhere near the damage which caused the operation but more reason for him  to be careful.
Posted by Jan at 5:07 pm

Oh, I'm so sorry to read of your son's garage - I hope nothing valuable was destroyed. Great news about your other son's recovery.

I am not fond of the early Dr Seuss books (as in for beginner readers) but I quite like the books for older children: "How the Grinch Stole Christmas" and "The 500 Hats of Bartholomew Cubbins" were two I read to my students and enjoyed.

Your knitting is a beautiful colour. I am knitting smaller items at the moment: fingerless mitts, hats and cowls mostly.

There seems to be a lot of rain around,wish some would fall over here,hope the damage was minimal in your part of the world!
I loved the travelling,the best part was being able to fend for ones self instead of looking after others comfort,Hubby would have been pain,lol,I enjoyed being able to knit for enough time to acually get a good part into finishing some items too though dealing with Mother was difficult I saw enough of other memebers of family to make it all worthwhile(Mother dosent like me associating with my Dads family)all in all I cant wait to go back to the point Im considering moving!Thanks for visiting!!

Well done Miss 10 with "ossify"! Sounds like a wonderful day, Dr Seuss notwithstanding :) ; glad you got to have a great day.

Sorry to read of the flooding of their garage...with the sun shining today I hope the torrential and constant rains are gone for now. And beautiful foggy photos in your most recent post.

I love having my hair cut too, it is a luxury experience!! I am not a big Seuss fan at all. I never really liked them or used them at school. Still, I am a big fan of children reading and anything counts.
Well done with that crossword Miss 10!!!
That garage looked so well protected too, I hope there isn't anything precious damaged.
Cousteau is a fabulous name and Brangian is looking lovely.
I am very glad that your son's operation has been successful and that his hard work has paid off.