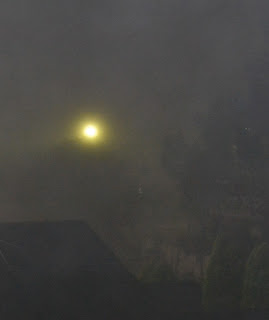 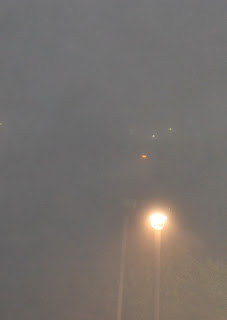 I woke yesterday morning about 4:30 and recognised that something was different.  Then I realised it was the light coming in my window which had changed.  There was no sound and a heavy silence hung over the place.  I got up and looked out.  There was an extremely heavy fog.  Extremely heavy indeed. I went back to bed but couldn't go back to sleep.  So I got up, found my big camera and took a few experimental shots.  I wasn't sure how they would turn out and I felt extremely silly standing on my balcony at that hour of the morning taking photographs.  I could just make out people in McDonalds below me which is open 24 hours.  I couldn't see them well so told myself they probably couldn't see me either as I was in the dark and they were in McDonalds with the lights on.

The picture on the left is looking towards the city over the top of McDonalds.  The light high up is from the beginning of the drive through section.  Not one city light could be seen. Not even the lights in the taller buildings.  The right hand picture is looking west and the light is perhaps five car lengths away from me on the road around the back of the service station back to the main  road.  Nothing else could be seen, not even the roof of the service station.  When I looked straight ahead, I could see lights moving on the main road but I couldn't see any part of the car they were attached to.  It was very eery and quiet.

As to knitting.  I've made a mistake and my lace stitch count is out.  I'm busy working back and trying to trace just where I went wrong.

My sister left today on an extended trip.  Grey nomad style, but she's by herself.  It's something she has wanted to do for many years but did not have money or health to do.  She now feels recovered enough after the operation to remove cancerous spot on her lung 15 months ago to try.  This was exactly the same type of cancer as every other occurrence of the original breast cancer but the operation was exceedingly painful and her ribs still hurt.   She bought herself a Subaru Forester  and a small A-shaped van with money from Mum's estate.  She's rented out her place on the Mid North Coast.

The van is A-shaped when seen from the side and has an annex and other bits which are put up when on site.  It's fine for one person and has a tiny stove and fridge.  She'll be by herself in the Forester so will have extra space there.  I asked itinerary and here are  her plans for the next few months.

I am headed north to Toowoomba to see friends first - then all round Qld-  Longreach etc etc and then into NT and up through Katherine to Darwin, thence Kununurra and further down to Newman in the Pilbara where I am housesitting for some weeks. And then? Wherever my Forester and Avan turn their head.

She's looking forward to it and is determined to go.
Posted by Jan at 4:23 pm

The fog was very thick here on at last tow days last week but this gloomy grey weather seems to have settled in again!

I wish you sister well on her trip and pray for her safety. She's braver than me in camping alone; I travelled alone once (for a weekend) but I stayed in a pub (and came home one night early because it was too noisy and the bed was too hard).

We get a lot of fogs here because we have an inversion happening over the valley. It is very eerie and has a strange dampening effect.
Oh no, an error in your lace, I hope you find the mistake and it is easy to fix.
Your sister's trip sounds wonderful, I am sure she'll have a great time!!