Come again another day.  Preferably well down the track.  Two more days of rain here yesterday and more forecast today, although easing.  I'm sure there will be dry times and droughts in the future, that's what happens here, but really, we've had enough rain for a  while here. 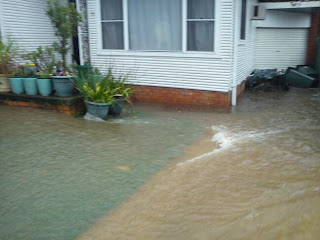 My balcony floor had a couple of inches on it yesterday as rain was coming in faster than the drain could cope with.  I keep the grate clean, so this morning I investigated with an old knife.  There was a matted wad of gunky stuff under the grate.  I've broken it up as much as possible and hope it's in small enough pieces to wash down the drain.
Son and DIL had a flash flood at their place yesterday.  DIL had time to move the car down the street to a higher spot.  She also did  some emergency SES type work on the rear garage door.  She could see what would happen and used a tarpaulin held against the door with a wall of logs from firewood pile.  Water was almost half a metre deep there.

This top picture shows their front lawn and driveway.  Garbage bins are floating near front garage door and the water is well on its way to porch level.  It covers a couple of steps behind the lower plant pots.  Fortunately, it didn't get quite that far. 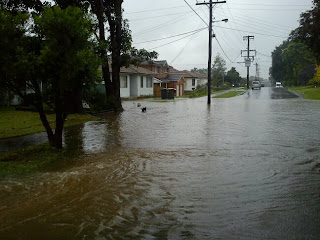 This is the street outside.  Their place is behind the second set of trees  and the light pole.

It drained away in the evening but son will ask council to check the drains.  They've been in the area for 12  years now and never had anything at all like this before.  Then again, the rain yesterday was torrential, most of the day and the western suburbs collected a lot of it.

I have been knitting with my beautiful Madeline Tosh Pashmina yarn.  I had problems with the first pattern I chose, I just couldn't seem to get it right.  Must have been missing something but I just couldn't see what I was doing wrong.  So I went back to Brangian shawl.  I think this is the fourth I've done.  I've now done the plain triangle and am part of the way, just a bit, down the beginning of the lace.  There are three charts of lace and the edging.

You have had so much rain and in such quantities it is unbelievable. That's a proper flood and I am glad you investigated your balcony drain.
We are expecting some torrential rain any minute now. The sky is dark cloud black.
I am glad you have settle on a pattern for your special wool!!

Thanks so much for stopping by my blog earlier. Glad that you have led me here! This rain has been unbelievable this week. Hopefully it won't continue all weekend. Fingers crossed! x

I'm glad your son's house was okay. Yay for a quick thinking and acting wife!

We had rain like that one night in February. The quilt shop where I attend class is at the back of an arcade; it flooded due to the drains not being able to cope with the amount of rain that fell. There was an amazing picture on the 'Net of the street the RSL club is in; it looked like it was on the banks of a fast moving river. Thing is, we used to have a shop right across the road so it would have been flooded for sure!

Glad your son's house is fine; the rain was amazingly terrible in its power.