that was the week that was 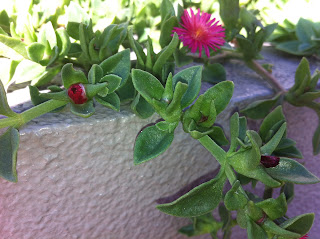 Summer seems to have suddenly decided  to put in an appearance in Sydney.  The last few days have been very sunny and dry and quite warm.  Much warmer than most of March.  Cooler nights too for the most part which I enjoy for sleeping.

I've always found red a difficult colour to capture well in a photo, no matter what camera I've been using.  This is, I think, a variety of pigface but with small flowers.  While I was waiting to be picked up yesterday I saw this next to where I was standing.  This is taken with my phone.  When I downloaded it, I was surprised at the accuracy this time round of the flowers.  Quite  a rich, dark red.  I was surprised.  I wonder if I can do it again.  LOL.

My eldest grandson was baptised yesterday at his pastor's house in the western suburbs here.  I had little warning this was coming.  They attend a fairly small, quite friendly community type church.  He's thirteen and growing up fast.  Even his voice is changing, not breaking yet but deepening quite noticeably. 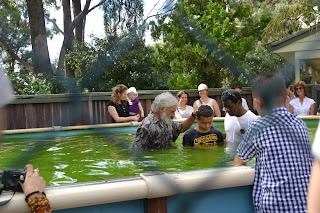 His grandfather came too, dressed as if for a  wedding.  Long  sleeve shirt and jacket and a tie, although it was quite hot in the sun. Everyone else was fairly informally dressed.  I had a sunhat on and was glad of its shade.   He spoke to a couple of his grandchildren, gave A. what looked like a lecture.  Then he spoke to a couple of the family and disappeared.

After it was over, we went back to my son's house. Quite a crowd eventually with some people I haven't seen for possibly fifteen years arriving unexpectedly.  Sixteen adults and more than sixteen children who all played well.  Son did a BBQ and we sat out under the jacarandas in light shade with a pleasant breeze.  Lots of salad and chicken and good sausages.  I could feel my grandmother turning in her grave with a big meaty BBQ on Good Friday instead of fish.  Some traditions I keep up and some I can compromise with.  That was one.  It was a very pleasant afternoon and I could hardly keep my eyes open when I arrived home.  Apparently even the thirteen year old took himself to bed at 7:30. 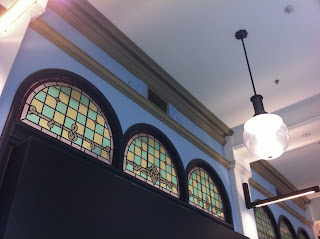 I had another trip to the city through the week and had lunch in the Queen Victoria Building.  These are some of the windows which are above  each shop.

I think that when it's a bit cooler, I'll take the camera and have a prowl around in the building.  There are lots of beautiful features which are easily missed when just walking through.

I've been working on the Wingspan shawl/scarf which i showed in the post below.  I wish I had known about the baptism earlier as I could have had it finished for A's mum's birthady present.  As it is. I have two more triangles and then the edging over the top to do.  I did take it out and showed it to her.  She liked it, so that was all good.

Many, many years to you eldest grandson; may God bless him abundantly.

Sounds like a wonderful day in many ways; and thank you for sharing your wonderful photos: and well done on the red! :) The QVB is a beautiful building: I look forward to more photos.

Blessings on you grandson. I'm happy you are seeing some sun now, the rain is settled in with us, and cold!
Your red plants looks like a Livingston daisy, or Mesembryanthemum , a colourful flower that opens in the sun.

Congratulations to your grandson. I have never met anyone who has been baptised when they are old, it's always babies!!
I can see the deep red, it might be a fluke but you could just say you are very skilled!!
They are beautiful windows, I have a thing for windows, some of mine are pictures and stained glass(not sure if that it the right word)
It's a win with the shawl/scarf then!!

We had meat on Good Friday too - since we haven't been Catholic since 1989 I didn't give it a lot of thought. Congratulations to your grandson - this is a big and important step! I hope the pool was as yucky as it looks - so green!