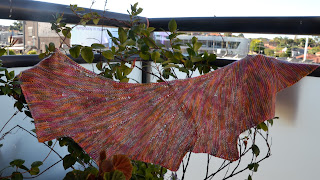 It's only the early part of April but here is something which is actually finished.  Really, truly finished.  It's the Wingspan scarf which is a free pattern on Ravelry.  Yarn is 50/50 merino/silk, dyed by Ailsa from Knitabulous and is called Honeysuckle Gold.  The yarn is now unobtainable but I was fortunate enough to grab quite a few skeins when she said she could get no more.  It's truly lovely to work with and the finished fabric is great too.  The skein was 116 gm and 416 metres.  I have a small amount left but probably not enough to do another triangle.

It's hanging here, held up by my will power and a few sharp bits from the plant behind it.  An easy knit on 3.5 mm needles, it took me eight days.  Each triangle is shaped with short rows and the scarf could easily be adapted to thicker wool. 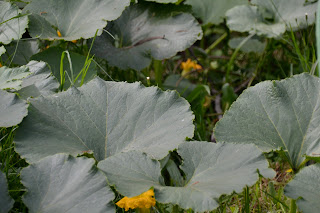 Grab them early, start them young is good practice.  This otherwise fairly ordinary photo was taken by Miss Nine.  To my knowledge she has had no experience  with an SLR camera.  I forgot to change the lens for the smaller, lighter one, so she was using mine which is quite heavy with the zoom lens.

When I saw her using it for some shots I thought that I would be deleting most of them.  Most of them are fine.  Focus is quite reasonable too.  She tok one of a friend and the zoom was a fair way out, but even there the focus is OK.  I'll have to watch her, or my camera won't be where I left it!
Posted by Jan at 4:05 pm

I laughed at your description of how the shawl/scarf was staying up! It looks lovely and the colour is so pretty!! Well done on finishing something!!