Christmas in July May.  I picked up two parcels from overseas today from the Post Office. one from USA and the other from Scotland.  Not really Christmas as I had to pay for both and they were for me.

The security intercom and buzzer system here is being replaced. Work on it started last Friday and mine was tested on early Tuesday morning.  Unfortunately one unit apparently has not been opened to allow the replacement unit to be fitted and the system is not yet live.  I think there is some standoff behind the scenes, something like the firm wanting money and the strata management not paying them because there's a unit outstanding.  Whatever.  It can't be used.  If access wasn't gained and a special visit was needed a charge of $300 would be levied.  So just what the story is I don't know.

If people expect a delivery or visitors, they either have to wait  downstairs to let them in or rely on a phone call.  As the system wasn't working, the courier could not notify me of parcels and they went back to the post office to  await collection.  There are three post offices geographically near me but my mail goes to the one which is most awkward to get to. 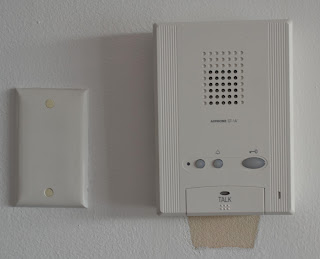 Here's a picture of my new intercom unit.  The old one looked like a phone hung on the wall.  It was in poor condition and was held together by cable ties.  Just look at the patch revealed under the new unit.  My unit was painted throughout before I moved in, a condition of the sale.  The patch in the picture was the old colour.  The paint was about twelve years old and a deep biscuit colour, explained away as a good colour as the place was rented out.  I love colours but decided on new white paint while I considered what I would do.  I am so glad I did.  I really like the white and everyone remarks how bright and airy my place is.  I've had a couple of people in from other apartments who also  liked it.  I gather their places are still biscuit.

One parcel was from We Love Colours in the USA.  Tights and leggings in ridiculous , happy colours which always cheer me up even if they are hidden under other things..  There's also a lovely deep green.  The tights are good quality, a great fit and reasonably priced.  They have free shipping to Australia this month. 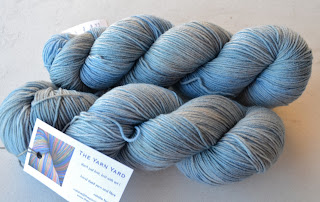 The other came from the the Yarnyard an indie dyer.  The colour is called Old Jeans and it's about a fingering weight.  Each skein is 400 metres long and I'm thinking would look gorgeous as a shawl, perhaps a square one.  Natalie from the Yarnyard generously gave each person who had missed yarn in the All Craft Media mess, a skein of yarn which was dyed specially.  I thought I'd support her by buying some yarn from her.  I don't buy much from overseas, although I have done so occasionally.  This is superwash merino. Unlike the yarn due  originally to  lace club members , this arrived from Scotland in eight days.  It didn't fall into a deep black hole or the Royal Mail system nor was it stolen by the postman and there was a posting tracking available for mine, unlike the other which just "disappeared" into thin air.
Posted by Jan at 4:22 pm

I hope they sort out the access and intercom soon. You can't wait outside all day for a parcel. I think it always happens that parcels go to the most inconvenient PO!!
I like your white much better then the old biscuit.
Nice wool, and very kind of you to support the kind dyer.
I love the idea of tights, but they make my legs itch!! Happy green legs.

I hope the security system mess gets sorted soon.

I hope all is sorted soon security-wise so you can get the parcels you order [and on my parcels when I was not home, it was a lucky-dip between 2 at times; and sometimes the other one than that which was written!??]

And, as one with no talent, I love reading of your knitting work and adventures: thanks for sharing.