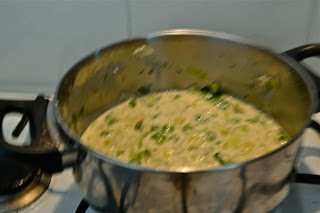 Herewith one poor photo of leek and asparagus soup.  Wrong exposure possibly and too much light and shininess.  However, I couldn't be bothered taking it again.

Here's my lunch today and possibly another two days, certainly one.  I don't struggle to eat 5 serves a day of vegetables, I like them a lot, but there are times when there are still bits left in my fridge and another delivery is due.  Like today.

I finely chopped an onion and about 10 cm of leek which was from the bottom of the vegetable drawer.  I had two small bunches of asparagus which hadn't been used for family lunch on Sunday.  I chopped that up small too, heated a bit of oil and tossed everything through.  Then I put the lid on, turned the gas down and sweated them for about five minutes.

I stirred through a couple of tablespoons of arrowroot which I use here for thickening.  It is gluten free, something I have to take into account with a granddaughter who is coeliac.  I added a good grind of tangy pepper  and one of the jellied oval stocks, chicken, from Continental.  Some water stirred through.  I cooked it at low heat  for about ten minutes and then tasted it.  I find the Continental jellied stock fairly salty so always taste once it's dissolved.  Then some chopped parsley and about a third of a small container of thickened cream, also a leftover.

As you can see, it's fairly chunky soup.  It was really good with a fresh roll and used up stuff from fridge.  I struggle sometimes with lunch, but it's been cold up here lately and soup was good. 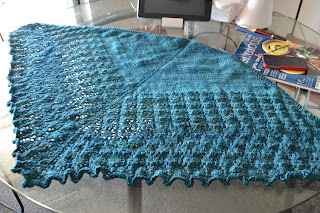 I have finished at last my greeny/blue  Brangian shawl from Yarnosophy.  It's also in a completely corrected version on Ravelry.  This is my fourth of these.  The name "Brangian" may be a forerunner of the name "Bronwen."It is shown here but it still needs to be blocked.  Ends also need to be sewn in.  I seem to have been talking about this for ages, so took a photo, even unblocked.  As you can see it's quite large and will be bigger when blocked.  Designer is Bronwyn Parry who lectures at UNE at Armidale and also writes romance novels, although I did not know that when I made the first of these a couple of years ago.  The yarn is Madeline Tosh Pashmina, colour  Cousteau. I bought the yarn from Jimmy Beans in USA and the service was quick and pleasant. 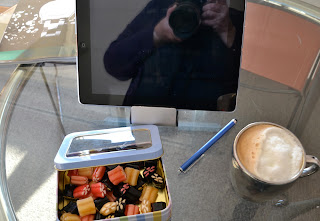 And finally a bit of fun.  My grandmother and I used  to love liquorice and we would buy one of every type of liquorice sample bags at Sydney Easter Show.  Then we would sit in the grandstand and gorge on it while watching the mounted police rides or similar.  I haven't been to the show in years and liquorice tastes different now.  It seems more bitter and with a less rounded flaovour. I tell my sons I don't want Mothers Day presents.  This year I was given a fancy tin of liquorice.  These look like another old favourite, boiled lollies.  My grandmother always had a jar of these on her Silent Knight fridge.  They had flavour then, often of the fruit which they portrayed.  I know sweets which look the same are still available, but to me they are just another sweet.

These shown here are entirely made of liquorice, a novelty item.  Some taste more of the traditional flavour, some of the pieces are the salted liquorice and some are quite spicy.  All in all, a bit of a laugh.
Posted by Jan at 1:53 pm

We made broccoli soup for dinner on Friday night. I bought my first swede and my first parsnip (in 35 years of marriage) yesterday; now I have to work out what one does with such things! We bought a "crockpot" last year and only used it a couple of times. I think it's time to dig it out of the cupboard and put it through its paces with some new recipes.

I have to avoid liquorice, but my dad loved it too and we always had a liquorice show bag. I love the aniseed jellied and it doesn't taste the same these days.
Horray, well done finishing the Brangian (I always say Brannigan in my head)
Surprise soup is sometimes the best. Tonight I had some onion, ginger, garlic, noodles, Asian greens and coconut milk, an 'oval stock jelly' and I bought some Tasmanian fresh salmon. Yum, it was delicious with some fresh lemon juice.