a model of domesticity

I have been a model of domesticity today.  Shopping, cleaning, vacuuming and cooking.  And some knitting. 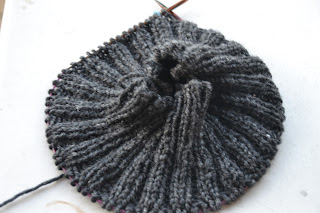 This is the hat for my son done in  Bendigo Serenade, colour asphalt.  After two false starts I have finally decided on  a very simple 2x2 rib and am getting close to halfway.  I probably am about at that point but want to make a decent turn back.  He spends a lot of the winter months watching his children play sport on windswept playing fields, so I think double over the ears will be a good thing.  I didn't like the first design so ripped it back and had moss stitch for the second.  I'd done quite a bit when I realised that it might not be enormous but was probably too large to be comfortable, so I ripped that back too.  It's easy to knit and the first few metre show little sign of being undone twice.  The photo was taken outside after 5:00 pm today when the light was rapidly fading.

After shopping I cleaned, including vacuuming and doing the bathroom.  I'm always surprised how messy the kitchen gets and how many crumbs etc just one person can drop.  However, it won't clean itself up so I have to do it.

When I returned from shopping , I started the chilli beef soup Cindy posted.  As usual, I changed the recipe or at lest the method.  I put all the liquid in the slow cooker, cooked the meat, garlic, onion and spices in the frying pan and added them to the slow cooker.  I cooked it pretty well all afternoon and it tastes great.  I wasn't happy putting a bowl of soup in the oven to cook, even with  lid on.  My left shoulder has been very painful lately and I didn't want to have to lift a heavy pot of hot liquid from the oven.  I've now put the rest in the fridge in a container  for more lunches. I meant to add: I used three cups of stock instead of  five and cut down other ingredients too.

Tomorrow the crockpot will be used again for cooking quinces.  I bought four today, all a medium size.  I love them and I love the wonderful aroma through the house as they cook.  I might even be very  busy tomorrow and cook some bread which I haven't done for quite a while.

I don't eat  a lot of sweet stuff but make an exception for lemon butter.  I used to make a double big batch of this many years ago, but this batch was small. 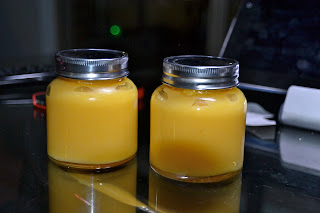 Heat very gently stirring all the time till it thickens and coats the back of a spoon.  Strain and put in container.

When I made this years ago it took ages.  As I said, the recipe was bigger and I doubled it.  I also used a double boiler for cooking which is slow.  I do think the boiler makes a smoother result, but I had no combination of saucepans or bowls which would work well.  I watched this very carefully and stirred well.  I have quite a few lemons left.  friend is coming to dinner one night, so I think I'll treat us both and make a lemon delicious pudding.

I love lemon butter - DD was given a couple of jars while she was away (her in-laws don't eat it) so she has promised me one!

So glad the soup worked out well, and to your satisfaction and recipe!!
I'm having knee trouble this week.
I use my big Pyrex bowl over a saucepan to make things like lemon curd and parfait as I don't have a proper double boiler either.
Sometimes it takes a few false starts at knitting before the wool and the pattern finally gel.