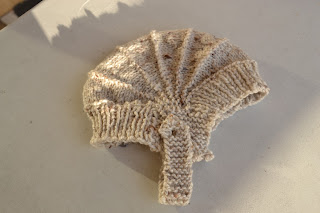 Another little Aviatrix from Justine Turner at Just Jussi.  This is one of her free patterns.  I've bought some and used the free ones and was lucky enough to win a  couple of hers as well.  They are all cute and up to date in styling.  No pretty lacy gathered matinee jackets as were done by my ex-husband's grandmother.  A skilled knitter, she made stuff for babies that was at least fifty years out of date.  I dressed each of my boys once in these beautiful jackets so she could see them wearing them.  Then I packed them away.

As Ailsa says in a recent post, this little hat is instant gratification.  I made it from start to finish yesterday afternoon, in between doing other things liker cooking dinner and doing some tidying.  Jussi has written  this pattern in a variety of sizes from three months to adult and three separate weights of yarn.  All clearly set out and easy to follow.  I've now made five, I think.

This one is for the youngest son of an online friend.  She's had lots of trouble with this one from during the pregnancy till now when he is four months old.  She also has several other children, so her knitting time is fairly limited.

It is a cute little hat. I wonder if my grandson would tolerate the strap under his chin now that we've finally got him to wear hats!

I love that pattern, I've made three or four too. I love that is has so many sizes and wool options. It's a lovely gift and one a mum and dad would use. Frilly lacy knitted things are lovely but not always practical for everyday baby wear.