Cindy posted a picture of her labs having a ball with a pile of iceblocks she threw out of her freezer.  In an email, she suggested that a picture of the inside of my freezer might be better than one of my handbag.  Actually, I keep my handbag fairly tidy and go through it regularly. 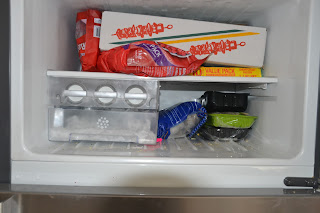 So, back to the freezer.  I actually have very little to do to clean my freezer.  Once I had a small build up of ice on the edge of the runner of the iceblock drawer where I had spilt some water.  Frost doesn't build up in it at all.  It's just contents which need sorting from time to time.

So here  goes.  The fridge itself is a medium-large Electrolux, stainless steel.  Even with just one person here, it often has quite a lot in it.  For a large fridge, the freezer is not convenient in my opinion.  It's awkward to fit stuff into.  I try to buy food when on special and then work my way through it before buying anything more.

Now the very large box which has been just poked in is a box of chicken souvlaki left over from Mother's Dy when five fewer people than expected were here to eat.  I've been told son "must pick t up."  Now he's still not driving himself and is not comfortable in the car, but DIL actually goes past here a couple of times a week and could call in.  I suspect their freezer is also fairly full.

Underneath the souvlaki is some shortcrust pastry.  I'm afraid I'm not as good as my mum used to be in making pastry.  One son once remarked to me when he was still at primary school that my meat pie was worth 9/10.  However he said that grandma's pie was 12/10, the difference being her homemade pastry. 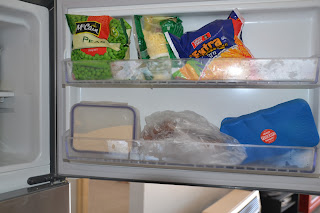 The bottom shelf has an iceblock storage drawer and the trays to make them.  This is often a nuisance and it's  built in and can't be moved.  Next to these is a tray of stirfry lamb, one of free  range organic chicken and a tray of pork and fennel sausages.  And some raw peeled prawns with tails on.  A kilo pack of these is under $20 and does me a lot of meals, six or more and feels like a treat.The top also has two unopened packs of raspberries which go on my raw  muesli every morning.  Two?  I don't know why.

Here's the door.  Two cold packs, some frozen dry yeast and an open pack of  grated cheese.  Some frozen vegetables.  I prefer fresh but keep frozen too.  The nondescript plastic bag contains a very meaty ham hock for some soup. 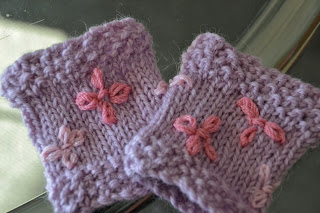 I found buttons for the little Aviatrix hat in the post below and sewed them on.  I made some small cuff's for the baby's big sister.  My granddaughters love the cuffs their mum made them a  couple of years ago.  These took about an hour from start to finish to make the two of them, including the intricate embroidery.  All is now packed up with a gift for mum too who's had a rough time with both the pregnancy and he weeks since the baby was born.  It's even been posted.

So am off to cook the pork and fennel sausages for dinner with some vegetables too.

That second last paragraph certainly made chuckle as I was reading about your freezer and thinking about ours! The buttons took me by surprise!

We have an old FBI freezer that was my MIL's; WM says it arrived in the family when he was a very small boy. That makes it about 50 years old and it's time for it to be laid to rest (and replaced with a much smaller model). That meant that when we were doing our 4-6 week "big" shop today, we bought less frozen items than usual as we only have the small freezer on top of the fridge in which to store stuff. Raisin toast was being sold at a really good special price but we can only fit one loaf in the "inside" freezer so, sadly, I couldn't take advantage of the more than $1 per loaf saving!

Such pretty cuffs!! I usually have frozen raspberries, a bag of ice in Summer and usually pastry but only puff as I make my own sweet and ordinary shortcrust and rough puff too. Oh that ice cube box must be really annoying!!