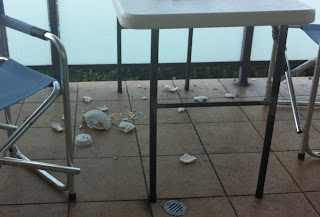 The cockatoos are becoming a menace here and their raucous call is definitely not a sweet serenade.  I noticed yesterday they they have attacked  the plants in the large planter boxes on the outside of my balcony balustrade.  They've pulled out leaves and left them in the box.  I think there's less food around as the weather gets colder and they are trying new stuff.

Two nights ago, I glanced out and  saw a  terrible mess on my table and floor outside.  My pot of hyacinths which I bought a couple of months ago was on the table and potting mix was all over the place.  The hyacinth bulbs themselves had been attacked and all three of them were over half eaten.

Then the following night, they excelled themselves.  The picture shows the solar powered light which had been on the table.  Nothing to tempt them to eat, not plants nor flowers.  This was a sphere with small cutouts of the plaster in a vaguely Moroccan style.  I don't think I've left anything out there now to which they might be attracted. 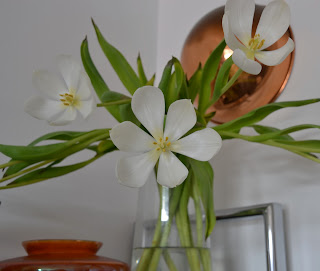 I would not have recognised this as a tulip if I had not seen it last Sunday.  These were the  miniature tulips given me by one of my sons.  They have opened up to be almost completely flat.  They are still attractive but I'll probably have to throw them out tomorrow.

They have a very waxy look to the petals but the stems are beginning to curl over.  I've enjoyed looking at them through the week.

And finally the real reason  for the title of this post.  The dark grey/black is Bendigo's newest offering.  The yarn itself is called Serenade and the colour is Asphalt.  It's 80% wool and 20% bamboo.  There's a slight sheen to it and it feels as if it will be pleasant to knit.  It's 8 ply, DK. 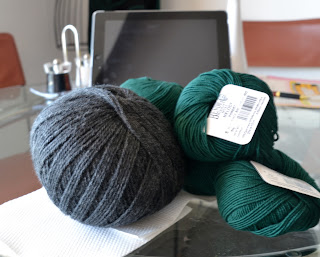 I made a hat for each of my sons last year but the middle son passed his on to his son.  He really wanted black and I used a dark blue.  I've been through my stash and don't have enough black of any ply to use.  So I've ordered one of the Serenade.  I hope it's dark enough for him.  Just something plain and warm which will come well down over the ears is what he wants.

The green is  more of Bendigo's Melody, a mix of cashmere, microfibre and merino.  I've done shawls and other things with this before, although the real reason I bought this was to take the total of my order over $30 to get free postage.  It won't go astray.  I think I'll use some of this for some fingerless gloves for an old lady  now in Canberra but who has lived all her life in far North Queensland.  She really does not like Canberra's cold weather.  Minimums overnight this week have been mostly well below zero.

Now to get dinner on.  Pork fillet in the tagine with preserved lemon, star anise and whatever else seems to suit.
Posted by Jan at 2:56 pm

Yes, the cockatoos can be a pain. Here it is a large flock of correllas and the fruit bats that make a mess (especially for those neighbours who still have those ugly relics of 1980s gardens - cocos palms).

Oh those wicked, wicked birds. They are a bother.
I would not have recognised the tulips either.
The Serenade is nice, the colour os perfect for your son. Neither of the greens call to me, but the Melody is so pretty!! That poor Queensland lady will love mittens, I saw it was -3 there the other night!!