halfway through the year

I've had a cold for over a week now and my brain has been fuzzy.  Not a bad cold, but enough to make concentration on lace difficult.  I've been plodding along on my Fellowship of the Ring mystery shawl.  However, the last clue has been delivered and the shawl is now available on Ravelry.

I mentioned the funny shaping  with a vast increase in the number of stitches and I thought it may be Boromir's sword.  A day after writing that, I remembered that the sword was a circle. So the shaping was not a sword.  Now I have a rug over the back of the sofa bed in my second bedroom.  As I looked at  this one  day I realised it was a pi shawl with the stitches doubling on certain rows.  Light dawned or the penny dropped or something.  This shawl is done the same way but it will be a semicircle not a full circle.  I can be  thick sometimes, or perhaps it was just the cold.  Whatever.  I have eight rows to do on the second last clue and then another fourteen to see the shawl finished.  I'll have to wind my second skein of this yarn, there won't be enough in one skein to  finish it.  Then perhaps a  beret out of what's left.

I'm currently planning to give this to  a woman here whose life is somewhat unpleasant at the moment.  Lots going on for her right now and in a really bad week, her elderly mother died suddenly. 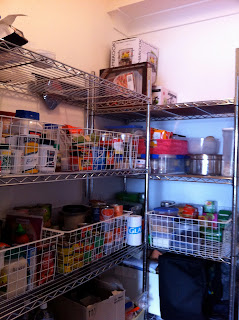 I have a small room called a storage room opening off my kitchen area.  Not quite two metres by two metres.  I put good shelving in there when I moved in, but it needed re-organising and some attention.  Stuff was put away but fairly haphazardly.  Not only that but the shelves were made of wire which was widely spaced, a trap for the unwary when buying.  Sauce bottles and similar did not  always sit straight and a bottle of vinegar fell over and oozed over a lot of things some months ago.

Two weeks ago I had a bit of a search for baskets to pack things into.  Then I found when I took rubbish downstairs that a unit with five large baskets had been discarded when someone moved.  Now this is frowned upon.  A collection should be organised with the council rather than leaving cleaners to deal with unwanted furniture.  But I was delighted.  I didn't want the frame but the shelves were just what I wanted.

Now I have a tidy pantry and the small mesh on the shelves means that bottles stand straight.

This is the start of the birthday season in this family.  One yesterday, another in July, then about eight more till mid-September.  Miss Nine is now Miss Ten.  I've mentioned before that she has been taking good photos with my big NIkon and discovering different  processing effects.  I spend more on birthdays than Christmas presents so I have bought her a small camera.  It's an Olympus and should give her years of service.  I bought it at what's called the "purple den of temptation, a shop near me which is devoted to digital cameras of many brands and prices.  This is an Olympus VG-160 and I think she'll enjoy it.  I've charged the battery, put the card in and done the basic set-up for her.

She and her sister  will be here tomorrow till next Friday to attend a Kids Games programme with my DIL, their aunt.  They'll be collected from here about 8:15 am and back just after 3:30 pm.  It's the first week of school holidays here for government schools.

Cindy mentioned Tasmanian schools are going to four terms a year, like the mainland.  I remember three terms a year.  I grew up in that system and taught under it.  I actually prefer it to the four we have now. I do however remember the middle term as a killer.  Winter, coughs and colds and flu everywhere and always fourteen weeks, sometimes fifteen and one nightmare  term of sixteen weeks.  I don't miss that term one little bit, even though I still prefer the three terms in a year.  Four terms puts the first lot of holidays too early in the year.
Posted by Jan at 8:52 pm

Hello,talking about colds,it seems everyone here intown has or is getting over a nasty variety,severe tummy aches followed by fly like symptoms,unfortuately my Oldest has come home for a few days till work picks up at the mine and he has a dreadful bug,soo hoping I dont get it,heaps of triple strength horseradish and zinc.. And yes I am thrilled with my new car but the best part is gaining a credit rating for myself even though I had paid off a $5000 loan before, the banks wouldnt touch me because of what happened in the US,though Hubby could get anything unfortuately (again!!) Hope you feel better soon!

I actually preferred the four term year (I taught in both 'systems'). The middle term was awful when it was fourteen weeks long, and third term took so long! The TAFE system, like uni only had two semesters but the TAFE system also gave the students school holidays which was good because so many of our students were parents of primary school aged children. I remember my fist full time year working outside the school system - it was bizarre only getting four weeks annual leave and weird not having that "holidays are here" atmosphere that permeates educational institutions!

The additions to your storage area sound like a great find.

Sorry, forgot to say the most important thing, I hope you are feeling much better really soon. Looking after grandchildren is tiring enough without being ill.

I gave my older granddaughter a camera for her 13th birthday, and she has had so much fun with it. She has even started a couple of blogs for her different interests. I remember when my family only had one camera: first a box brownie, then an instamatic. It's mind-boggling to me that every member of a family can take their own photos and not have to have them developed.

I hope everything is going well at your house and that you are feeling well. What a great find and your storage area looks fantastic and very accessible too.
The shawl is just gorgeous and I love all the separate sections representing a different character. Maybe your cold was addling your mind??
Our middle term was only 10-12 weeks, and we had longer Summer holidays to take advantage of any good weather!!