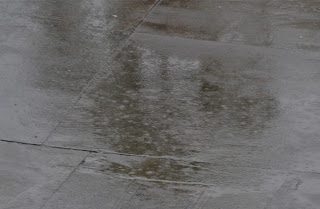 I hope your birthday is more cheerful than it would be were you down here.  Wet, cold and very wet.  It has rained non-stop for about 18 hours where I am, sometimes very heavily.  Very dark, quite cold.  I have in the first week of June had my gas heater on more than I did the entire winter last year.  This was taken just before lunch, about 12:30.  As you can see, it was quite dark.  I've cropped the photo but what you see is what you get, otherwise.  No retouching.

I call this "raindrops keep falling on my head." and on the yard outside.  The seagulls have been in their element and have been swimming in this puddle which was quite deep from the rain and much bigger than shown here this afternoon. 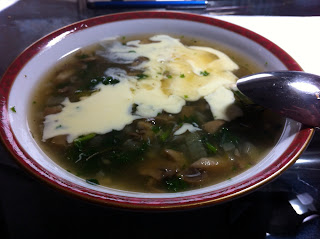 Just the weather for soup.  I had 200 gram of mushroom caps and some chicken stock I made yesterday from the bones of a small Macro brand organic chicken.  I chopped the mushrooms, one clove of fairly potent garlic and a small onion.  I removed the fat from the stock and cooked it all gently with some dried rosemary.  Just before serving I added fresh parsley and some lemon thyme and a small amount of  cream.  It was very runny so looks as if I used a lot.  Just the meal for the weather.  I could feel the warming effects of the soup  for ages. not to mention its general yumminess. 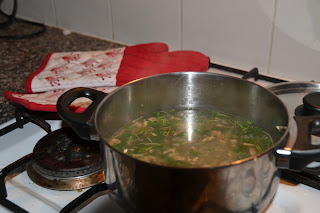 Here's the soup cooking.  I have enough for another two lunches.  The rain may go on Wednesday according to the forecasters, so extra soup is always a good thing.  The chicken was quite small but adequate for just one person.  It was just under a kilo.  I roasted it and had some with vegetables the first night.  The next day I took all the meat off and made the stock.  The meat went into a white sauce with other goodies and a lot of leek and I made a chicken pot pie.  Then tonight I had the last of the meat and sauce and other vegetables.  Plus three lunches of soup.  Not bad for $10.  Macro brand food is now sold through Woolworths.  They used to have a very large store in Hornsby on the floor above Woolworths.  Lots of fresh organic meat and vegetables and a very large range of the usual beans. lentils, good shampoos etc.  Then Woolworths took them over and announced proudly. "Now you can buy Macro goods here."  So you could but about 5 % or less of what I could have bought before the takeover.  I don't buy food specifically if it is organic but do often find that it tastes better than the usual range.  Milk and eggs in particular.

The wok burner to the left of the saucepans was mistreated  before I bought here.  The previous occupants ate loads of curry and other similar foods.  Inside the burner is encrusted with baked on oils and spices and you can see the discolouration on the outside.  We've even chipped at the encrusted burner with a screw driver.  We've all had a turn and if one DIL in particular can't get something clean, then it's set there for life. 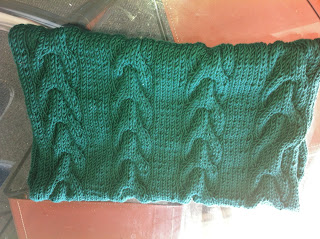 DIL loved the Pine tree Snood (or cowl) as I would call it.  This picture should have been rotated, the cables are horizontal around the neck and it's quite deep so is very cosy.  She and my son  and my friend and I had dinner on her actual birthday at the local pizzeria.  Well known, this place attracts customers from quite a long way away.  It was only a minute's walk from my former home and my son was such a  frequent customer that his design for pizza featured frequently on the blackboard menu.  We had a lovely evening and all enjoyed ourselves.  She was glad of the cowl.  She's been in Darwin for a while visiting her brother and his wife and their one year old daughter.  The climate back down here was much colder than there.

Finally, more knitting. I'm plugging away on my Fellowship of the Ring Mystery Shawl KAL.  I've been distracted by a mistake there.  I ripped it all and then caught up.  However, I concentrated on the cowl and I'm visiting youngest son on wednesday.  He's been quite ill. We all thought it was possibly pneumonia and he sounded really rotten but seems to be on the mend now.  I made him  an alpaca scarf last year and he said he would love a balaclava.  He had one as a child and enjoyed its cosiness.  Where he catches the train in the morning is less than five metres from WoyWoy Bay and the chill off the water is bad in the morning.  I finally found a very old pattern and have tweaked it a bit to modernise it.  So that's been my main knitting for a couple of days now.  I'm using what's left of the Serenade.  I hope I have enough but if not, I'll do the stocking stitch at the top of the head in the black alpaca I have.
Posted by Jan at 9:42 pm

The cowl is lovely. The soup looks delicious - just what I need because I have developed a rotten head cold which has completely blown out my sinuses - I feel like my face is packed with balloons! WM spent Saturday draining his fish-pond in the backyard in order to build a new deck - the hole, which is clay of course, is now full again!

Definitely soup weather: yours looks and sounds very yummy. My brother-in-law makes a very nice pumpkin soup I have been enjoying.

Prayers for health and recovery for the youngest son, and the cowl looks wonderful -- great colour too.

I hope yur son is feeeling much better now. I think my pop had a balaclava from the old Patons knitting books.
Yes, you can make a lot of things from a roast chicken, it's really very economical. Same thing happened here with a local supermarket being taken over by Coles. It had lots of Asian, European etc foods and though we were promised they would keep the lines, now they have all disappeared.
The cowl is fabulous and good luck with the Mystery KAL.
It's been so very rainy here, and icy but today we have fog and now sun!!