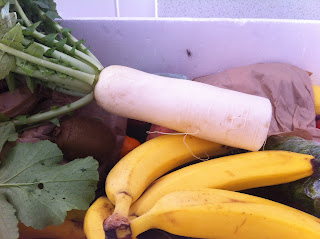 I was surprised when I  opened my fruit and vege box on Tuesday.  There was a large piece of daikon in it.  Now I've tasted it, I knew what it was, but have never used it.

It has a radish taste to it but to me it seems milder than many radishes.  I've seen it used in salads but I knew it could be cooked.  I decided to try it and searched for a few recipes, although I didn't find anything I wanted to try for just one person.

I grated about 2/3 of what you can see here on the coarse grater.  I put this into a colander and sprinkled it with salt.  I   left this  draining  for about an hour.  While it was draining I broke an egg into another bowl, added a clove of garlic chopped, some red  capsicum, half a large red onion and mixed all that together with a fork.

Then I squeezed as much liquid as possible from the grated daikon which reduced in volume by a surprisingly large amount and mixed it into the egg mix.  It was too runny to form patties so I added some breadcrumbs.  My bread had a strong malt flavour so I used Panko crumbs from the pantry.  Then I made balls and flattened and fried them. 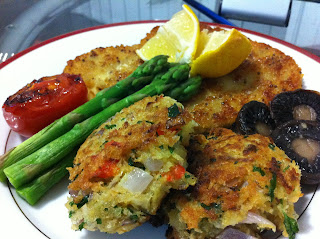 You can see the results in this other picture. I made three large patties and one smaller.  With a squeeze of lemon juice they were quite nice and certainly different.  They did not have a distinct radish flavour but I enjoyed them.  I  served then with lemon but aioli or sweet chilli jam or sauce would have been good too.

They were a bit more fiddly to make than I usually do for just myself.  I probably would not buy daikon just to make them.  However, I was adventurous and did use the daikon.  Well almost all of it and I think the rest will go.  I hate waste but this could have easily sat in the vegetable bin in the fridge till I threw it out.

Yesterday I went to my son's place up the coast to get my hair done. It was wet up there as it was most of the day in Sydney.  However, there was a  brief fine patch when I was about 30 minutes by train from the city.  I looked out of the window at Normanhurst near the old brickworks and saw two tiny bunnies nibbling grass on the verge.  I was past them before it dawned on me what I had really seen.  There used to be a rabbit which would be out and about at about 5:30-6:00 am when I lived at Killara.  Not in our place but on one of the side streets to the station.  It was full grown, but these were small.

I'm giving knitting a rest for a couple of days.  I worked on son's balaclava most of Tuesday in an effort to have it ready to take it with me on Wednesday.  I didn't get it done, but I did get very stiff shoulders and fingers.  I'll probably pick it up again on Saturday but be more circumspect in how much I do.  Shoulders are a lot looser today, they were very tight before.
Posted by Jan at 10:07 pm

I've never tried daikon - getting a veg box seems like a good way to be a bit more adventurous. Sometimes I bring unfamiliar foods home and they don't get used - like the couscous that has been in the pantry for-seemingly-ever!

How about braised beef brisket with chu hou sauce? A staple dish in Asia. The daikon adsorbs the flavours perfectly and best of all there's ample for leftovers.

Thanks for stopping by, whoever you are.

Yes, I know about that dish and have seen a lot of recipes for daikon and beef. I used what had in the house.

I am not a vegetarian but eat little meat, with beef being the bottom of the list. I really, really dislike brisket although it is a very popular dish at the many varieties of asian food shops around me.

Well I think you are very adventurous, I am not sure I would have know what to do!! They look delicious!

Well I think you are very adventurous, I am not sure I would have know what to do!! They look delicious!