hullo! I can see you in there! 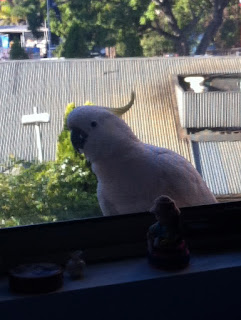 It was almost 4:00 pm this afternoon and I was sitting at my desk in the second bedroom writing an email to my sister who is now in Newman WA where she will be house sitting for a friend for about six weeks.  There was a bang at the window and I looked up to see this cockatoo sitting on my actual windowsill and staring at me.

I 'm used to them on the balcony rail, out of sight to the left, but not on the sill.  I grabbed the phone which was handy and took some pictures.  The roof behind is glary and phone did not make allowances  for that, but my camera was in  a cupboard close to where the bird was.  The noise I had heard was its beak hitting the glass of the window.  It stared at me and showed no sign of moving.  Every time it turned its head away, I  took another step closer until I dared go no further.

They had arrived early, I think food is getting scarcer and yesterday here was horrid, wet all day, very grey and quite chilly. 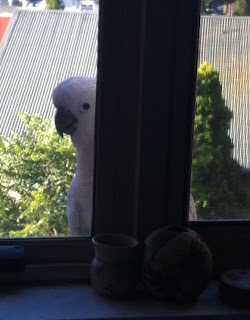 It moved to the divider between the two windows and played peekaboo with me.  Now you see me, now you don't sort of thing as it ducked behind the window frame.  Eventually it decided it was getting nowhere with me and flew away.  I had seen someone in another apartment offering a cockatoo food earlier in the afternoon.  However, it didn't look like seeds or a seed cone and the bird was uninterested.  I wouldn't feed them here.  They are belligerent enough without being encouraged.

I am finally catching up on my mystery shawl downloads.  I like the concept but am unsure what the article  will block out to.  From the bump on the left up to the needles is thirty-two rows but there are no increases in the number of stitches in that section.  I've double checked the pattern to make sure.  I hope it will be OK when finally all stretched out. 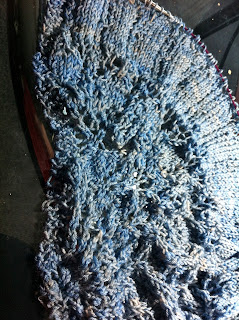 I was well behind with this and I think clue 7 is due tomorrow.  I'm about 75% of the way through clue 5 and I have clue 6 on the iPad.  I got behind when I realised DIL's birthday was last week, not this, and when I decided to do  the Paton's balaclava for my son.  That's still not finished.  I must spend an hour or so on it and post it to him.

I mentioned that he was sick and sounded terrible.  He was finally able to see his regular doctor last Thursday and have some tests done.  Results came back on Friday.  Every one of them, parents and both children have whooping cough!  They are all past the stage of  being able to infect others but the cough is still there and may  be there a long time yet.  Especially for my son who was the last to  get it.  Childhood inoculations do not last for life as many of us think.  Including me, until his elder brother had it about ten years ago at much the same age as this one is now.  However, another granddaughter had it a couple of years ago just after her five year old booster shot, and the two with it now have had all shots at correct times.  Her cough lasted three months and my son has been warned that he is looking at at least  that same time frame.  They are all on antibiotics just to make sure there is no actual infection left.

Sutherland shire in the south has had an epidemic of whooping cough  for several months now and it seems as if it's at that stage on the Central Coast.

DD and SIL were told to have whopping cough vaccines after OG was born, and the grandparents were also advised to do the same. WM had his; I was ill then and haven't even thought of it since - thanks for the reminder!

Wise of you not to feed the cockies!

I have had a slew of catch up vaccinations in the last few years. I had my triple antigen few years ago. We were always told the vaccinations were for life, but now we know they are not. I hope they are all feeling better soon and recover quickly.
What a treat to play peekaboo with the cocky!!

Goodness, I'm glad they got treated and that they found out what it was.

I admit to doing a doubletake for a moment--cockatoos are wild there. Here, if you see one it's an escaped pet.

And then there's the famous green parrot flock in San Francisco; we used to have an individual one in our neighborhood but I think he found the rest of them a little to the north.