It's June, so winter.  I have friends in England where the season changes at the equinox but I hardly ever think of that here.  Besides, although the days get longer after the equinox here, the temperatures get colder because of the slant of the earth away from the sun.

I woke after a mild night to a very dark grey sky.  While the night was mild, the temperature hasn't risen much so it's now cold.  It's rained and looks generally miserable. 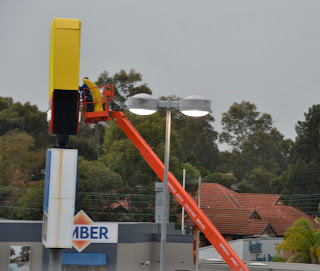 The McDs outside has had electrical work done in the last couple of days.  There seems to be something wrong with the wiring of the very large golden arches signs.  Workmen spent some time on them a few weeks ago and the lights seem to regularly blow a fuse.  The large sign to the right of this picture but off screen, had workmen at it all day yesterday.  I looked out and there were two men in this crane this morning.  The front of the sign was off and they appeared to be working on the woring.   Just look how dark it is! This was mid-morning.  There was misty fine rain and a few minutes after I took this, it poured.  OH&S safety features seem ignored here.  I'm glad they got down safely although some of the cover of the sign was not replaced in the rain. You can see the large yellow bit on the crane platform which did not get put back. Possibly the top of an arch.

I still had lots of potatoes left over from the unused bag I bought for Mother's Day.  I cooked some and quite a bit of a butternut pumpkin and made the best batch of pumpkin soup I can remember for a long time. So good, I had two serves for lunch.  There's some in the fridge for lunch tomorrow and some in freezer for a week or so.   I  cooked a large piece of leek and some onion in frying pan and some of that was well browned and crunchy.  Instead of blending that with the pumpkin and potato, I saved it and stirred it in with some parsley at the end.  I used a heaped teaspoon of ground nutmeg, which I don't like, but which really enhances the pumpkin soup.  Two bowlfuls went down well.  Just right for the day.

When I cooked the potatoes, I kept out a couple of pieces and I'm having fishcakes for diner.  Another old fashioned meal, just right for the day.  I bought two pieces of Tasmanian salmon yesterday and had one last night with other vegetables.  One  piece was cooked and leftover and is now mashed with the potato, some lemon, pepper and Dijon mustard just waiting for cooking.

All I want now to suit the day is some T2 tea, possibly quince, and some gingernuts.  Neither is in my pantry and the service station has a very poor range of biscuits, mostly chocolate which I don't buy.

Knitting suits the weather too.  I've done the first two clues on the Lord of the Rings  Fellowship shawl mystery clues.  That's 34 rows. However my stitch count is out on the last row, so I'll have to have a good look at that.  Possibly a  missing YO. The next clue is due Monday.

DIL's birthday is next Saturday so I'm making a cowl for her.  The cable looks a bit wonky but that's the curve in the  cord on circular needles.  This cowl has the cables going  horizontally around the cowl and the rather bright contrast is a provisional cast on to pull out when grafting ends together.  This is true sit on the lounge and knit type TV knitting.  Very regular in numbers and nine rows and then the cable row. It's 8 ply Bendigo Melody, merino, microfibre and cashmere.

Good news on our security intercom.  Notices now say next Wednesday is the day!!  I think lack of information about it has been as annoying as the fact that we had to go downstairs to let people in.
Posted by Jan at 4:27 pm

Winter is the same here: as the days get longer the cold gets stronger. Winter kind of starts on the solstice.I really notice the days drawing in and the days are dimmer and grey.I'm glad Maccas is helping with employment, if not safety.
I bought leeks for soup today. leek and potato though. Yum. Leeks are so sweet and delicious. Oh yes, fish cakes are a simple but sophisticated pleasure!!!
The cowl is just gorgeous!! It's a beautiful colour and lovely cables!!

The soup and the fish cakes sound delicious. I should have dropped in for lunch as I was passing by on this cold and miserable day! This tine WM was driving and we were heading to the Fabric Remnant Warehouse at Rosebery. The traffic coming home was horrendous; no wonder that stretch of Parramatta Road was named the worst road in Sydney. We crawled all the way from Petersham to the M4!