end of the week 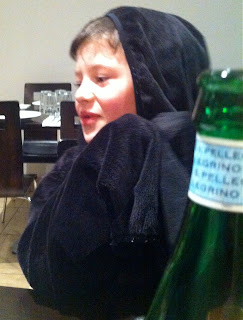 The end of a long week for all of us.  I had no trouble waking this morning but didn't feel really rested.  Tomorrow should be better,  hope.

This is my youngest grandson, aged six.  He was cold so put on his mother's velour hoodie.  His mum and dad, big sister, uncle  and DIL and I had dinner last night at the local pizzeria  where we have gone  for many years.  It's less than a minute's walk from where I used to live.

Poor little F was exhausted from his week of holiday activities and from being away from his parents for that time.  His first time away.  He had a bit of a meltdown at son's place on Thursday but recovered to enjoy the last day.

Other son and his family had something already arranged so we were a smaller group.

Mario's pizzas are wonderful and he has customers from all over Sydney.  We were out the back in an area which used to be noisy as there was nothing to absorb the sound.  He's fixed that now with special tiles on the ceiling and we all had a great time.  Not only are th pizzas wonderful, but Mario is a good guy.  Some years ago he had a pizza designed by one of my sons on his blackboard for ages.  Even now, if someone asks for a PB special, he'll do it.  When my eldest was miserable in hospital after the back operation about three months ago, he made a special  small pizza for him  about 11:00 at night.  DIL took it and there is a photo of the empty box with a message scrawled on it.  Apparently he often does this for his customers and takes it himself, although he does not normally deliver pizzas at all.  Son thoroughly enjoyed it and was really touched by the gesture.

Several pizzas disappeared quickly and two lots of garlic bread done in the pizza oven.  He also does a desert pizza with nutella which is pleasant, but last night he sent us one  with very finely sliced granny smith apple and cinnamon, topped with a small spoon of good vanilla icecream on every slice.   I have a photo of one of the adults draining the apple juices and melted icecream from the pizza plate, but thought better of posting it.

I gave the balaclava to youngest son while we were at Mario's.  As I though, it fits him much better than it fitted me and he was very pleased with it.  I'm glad, I really would not have wanted to redo it.  There is a lot of single ribbing in the neck which is quite long and was boring to knit.
Posted by Jan at 8:50 pm

I love pizza and your description of Mario's sounds wonderful. There is no decent pizzeria in this area; I really miss the pizzeria which was just around the corner from our old house. We've lived here for more than twenty years but haven't found anywhere that we stay loyal to for long! There's a good pizzeria in Main Street in Bl*town but it's half an hour's drive just for pizza!

Glad the balaclava fitted. I have frogged the bed socks and started again.

It must have been cold!! A meltdown is not unexpected and if it is quickly over, not a worry.
Wow, that sounds like a fabulous pizza place, and what excellent service.
Good balaclava news, lots of dark single ribbing can be tedious.