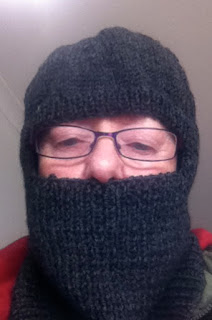 This oh so flattering shot of me shows the balaclava I've just finished for my youngest son.  It had been almost finished for about three weeks but a big (unsuccessful) rush to finish it left me with sore hands and a disinclination to continue.

It's made to  an old Patons pattern in a Winter Warmers book.  I'm on the lookout usually for ill fitting patterns in books.  Odd photographic angles and similar which often mean  pattern really needs adjusting.  However, I made a blue with this.  There are four sizes and each is shown being worn with neck of balaclava well tucked into a zipped up jacket.  The neck is sloppy.  I don't think son will mind, but I should have made it smaller.  It will keep him warm on station in the morning where the wind from  the water in the bay a few metres away is icy.  I made an alpaca scarf last year so he should be cosy now.

As you can see, the head is also big on me.  You did see through my disguise?  However son has a big head and dreads as well so it should be fine on him.  As an eight year old he wore man's size cap or towelling hat.

When we had a place in the country where it was very cold, each of the boys had a commercial balaclava, double fabric, probably acrylic.  They were bought  at a disposal store and they loved them.

Son has been after one for ages but I could not find a pattern.  This is made from 8 ply Bendigo Serenade, 80% merino, 20% bamboo.  I had made a beanie for another of his brothers from  the same and wondered if I would have enough yarn.  I had a bout 5 metres left from one of Bendigo's large balls.  There's a lot of knitting in the balaclava neck.

Week of granddaughters is almost over.  One more sleep and they will be picked up tomorrow afternoon. It has been much better this year.  Miss 7 still has tantrums, I've seen them at home, but there have been none yet at my place.  Says she crossing fingers.  Last year there were two or three every day, screaming shouting, crying and stomping feet type of thing.  Hopefully as she gets older, these will completely go.  Food has been eaten without fuss, she's put on something long-sleeved without my suggestion and she's willingly gone to bed at a reasonable hour.  All without complaint.  Her parents would have been horrified to see her behaviour last year.

Miss just 10, for whom I bought the camera linked in post below, has really enjoyed it.  She even managed a decent one of me sans balaclava.
Posted by Jan at 2:03 pm

Glad to hear you survived the week - you'll probably need a few days rest now! WM used to wear a balaclava when he worked in the yards at P. station, especially when he was on night shift! Now if I could only get him to wear a jumper; ah, well, at least he's wearing singlets after being sick last week!

I thought your blog had been hijacked by Ned Kelly!! Great modelling and it looks very warm and cosy, it will definitely do the job!!
Glad that the week has gone smoothly and everyone has enjoyed themselves.

I have that book and Woolcraft, recently made a knee warmer from it